Nikki returns home to give Toby some shocking news, Daphne decides on which guy is right for her, Bay and Tank work through some issues but find some more and Regina learns who Wes really is in “The Ambush.” 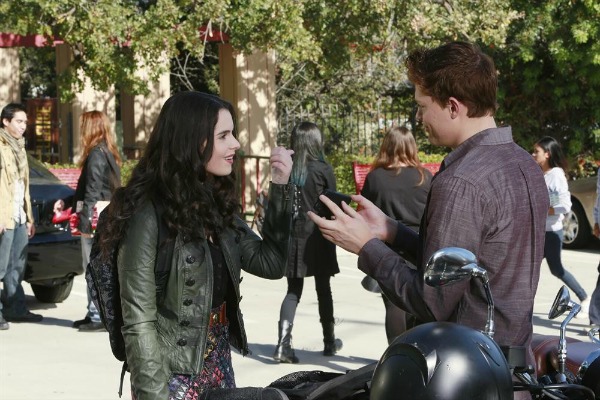 You know how people always say “be careful what you wish for because you might get it”? That’s how I felt about this episode of Switched at Birth.

Ever since last season, I’ve been kind of annoyed with Toby’s relationship with Nikki. Truthfully, I didn’t have a problem with her but more with how he seemed to feel around her. Toby used to be really into his music with big dreams, and suddenly he meets this girl and all of that vanishes. He spent most of Season 2 being sad, and I wished that Nikki would just go away. Then they went and got married, and I thought maybe they could make it, but now it looks like that’s not going to happen.

In my review of the last episode, I talked about how much I was enjoying watching Toby find something new to put his heart into, like coaching field hockey. He helped Sharee get closer to a scholarship and found new meaning for his life. Then Nikki showed up and announced that her short-term thing in Peru was turning into a full-time job. There was really no one to blame, they just discovered that they wanted different things. It looked like that was the end of their marriage, and as much as I thought I wanted that, it was still hard to watch.

Speaking of a difficult relationship, Bay and Tank had a lot more ups and downs to deal with in this episode. When it comes to hanging out and having fun, Bay and Tank get along really well, but when it comes to the more serious stuff, that’s when they flounder. Bay had every right to say no to Tank, and I loved the talk she and her mom had about it afterward. But it did make me think that those two may not be right for each other if she isn’t sure about that. It was a stark contrast to the ease of Bay and Emmett’s discussion at the beginning of the episode. I’ve always felt like there was a strong connection between those two, and while I’ve resigned myself to it only being a friendship, it looks like that might change.

As for Daphne, she finally figured out who was the right guy for her but also discovered that going out with Campbell came with its own set of challenges. I loved that she and Campbell were able to be so open and honest with each other about all of it. Sure, they went through a few awkward moments, but I think they’re on their way to something really special.

I can’t put my finger on why, but Regina’s story is beginning to bug me a little. I thought Wes was a good guy at first, but he’s proven time and again that he’s basically a jerk. Why the heck is she still working for him? Was she really surprised to find out that he offered people less money for their businesses than they were worth?

Bay volunteering to get the photo framed for Emmett. That was sweet.

Toby pointing out that they had scholarships for people who speak Klingon, so they definitely had them for field hockey, too.

Tank immediately wanting to get a donkey for the retaliation plan.

Kathryn pointing out that it was OK to be nervous about something because it’s unfamiliar.

“It’s not too late to bleach that giant penis onto that perfect lawn.”

“Work fast and keep your head on a swivel.”
“I love it when you talk GI Joe.”

Tank and Bay’s artwork on the statue.

“You think just because you’re not a virgin, you shouldn’t have any hang-ups about sex? I wish that were true.”

Emmett knowing that Bay was the one who dressed up the Buckner statue.

Toby watching with pride as Sharee talked to the scout.

Bay’s mom being able to ask her if she was getting feelings for Emmett again, without saying it at all.

Campbell showing Daphne exactly how it would work between them.

What did you think of this episode of Switched at Birth? Do you think Toby and Nikki’s marriage is really over?