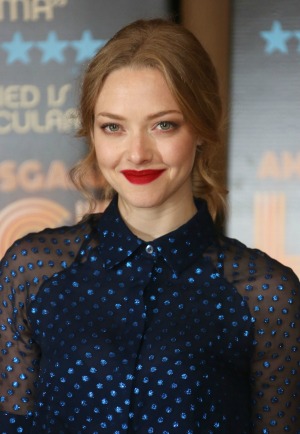 Amanda Seyfried is not the kind of actress who shies away from a role because of a sex scene and has actually learned to love those she has been in. Seyfried has kissed stars like Channing Tatum and Justin Timberlake, and even Jennifer’s Body costar Megan Fox.

“We kissed really well together,” Seyfried told W magazine of Fox. “We have similar kissing styles! If I watch that scene, it’s actually really sexy.”

Seyfried has appeared in many romantic comedies, including Mamma Mia, Dear John and Letters to Juliet, but got her start in Mean Girls and Veronica Mars. Seyfried admits those scenes have occasionally translated into real-life romances.

“When you’re young, it’s hard not to get together with your costar,” she said. “It’s not always a great idea, but the experience of making a television show or movie is so intimate and romantic. And I love acting like I’m in love!”

One of those romances was with her Mamma Mia costar Dominic Cooper, whom she was with for three years. Even though the relationship didn’t work out, they still “love each other.” She has most recently been linked to actor Justin Long.

Amanda Seyfried: I go for “creeps” >>

“A lot of my costars have been sexy guys my age who are really respectful and cool,” she said. “So, why not? I’m not going to pretend it’s not fun.”

Seyfried’s interview is in the April issue of W.