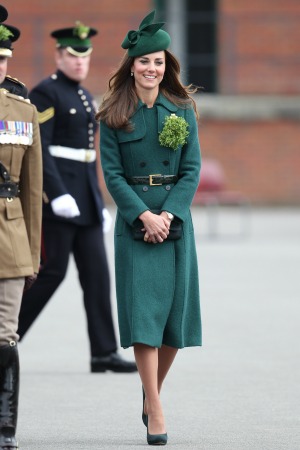 Don’t hold your breath for another royal baby — according to Prince William, one is quite enough right now.

Will and Kate visited the Irish Guards in honor of St. Patrick’s Day, with William attending in the role of colonel of the regiment and Kate presenting sprigs of shamrocks to the officers and guards for the third year in a row.

When William was asked by a regimental sergeant if he and the Duchess have plans to make Prince George a big brother, the second-in-line to the British throne replied, “Maybe one day. One’s enough at the moment.”

Added retired regimental cook Ray Kidd, “I asked him if he’d bring George next time and he said ‘Yes that’s a good idea, I’ll try and get him fitted for the uniform.'”

Kate broke out a lovely new green coat from Hobbs for the occasion, which she paired with a textured leather belt, a green hat previously seen on the Duchess on Christmas Day 2013 and a pair of forest-green suede shoes by Emmy. Completing her ensemble were the Cartier shamrock brooch previously worn by Queen Alexandra, the Queen Mother and Princess Anne, along with Kiki McDonough cushion-cut green amethyst earrings and a gold and silver Tissot watch.

The new Hobbs coat marks a departure for Kate. The previous two years she attended this event she wore a green Emilia Wickstead dress coat which she had let out in 2013 to allow room for her growing baby bump.

Will and Kate are busy preparing for an official visit to Australia, where we will most likely catch a glimpse of Prince George for the first time since his christening.

Kate Middleton turns from princess to fairy godmother
Kate Middleton rocks a tiara for the first time since that wedding
Off with his head! Kate Middleton’s hairstylist betrays her