Is Madonna a massive fan of Game of Thrones? It appears the Queen of Pop may want to be the Mother of Dragons instead because she wore a striking Daenerys Targaryen costume to celebrate Purim this year. 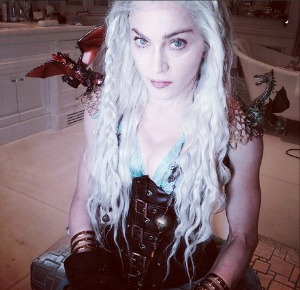 Well, well, well, it looks as though Madonna is going to be one celebrity who definitely cannot wait for Season 4 of HBO’s Game of Thrones!

The Queen of Pop decided that she wanted to embrace the world of fantasy and dress up as the exiled royal Game of Thrones character Daenerys Targaryen — played by the beautiful Emilia Clarke — for Purim on Saturday.

The songstress took to Instagram to share a picture of herself looking very striking in a Daenerys Targaryen “Mother of Dragons” costume, complete with a platinum blond braided and wavy wig, and two tiny dragon figurines on her shoulders.

She captioned the picture, “Happy Purim!!!!! All Hail All Queens! ##certainty.”

At least the “Like a Virgin” hit maker’s latest Instagram image will thankfully cause less controversy than her previous posts have, some of which include the picture she posted of her underage son Rocco holding a bottle of alcohol and her use of the N-word in a caption.

According to Us Weekly, Madonna holds an annual Purim gathering to celebrate the Jewish holiday that commemorates the salvation of the Jewish people in the ancient Persian Empire, which is traditionally celebrated by observers who dress up with masks and costumes. It is no secret that Madonna has practiced Kabbalah for years now, and she obviously decided to go all out with her costume this year.

If you are as big a fan of Game of Thrones as Madge appears to be, then you will be pleased to know that Season 4 debuts on Sunday, April 6, at 9/8c on HBO.