Amanda Seyfried has discovered that there is a serious flaw in the airport security system. The star recently managed to pass through a security checkpoint undetected with a Swiss Army knife in her possession. 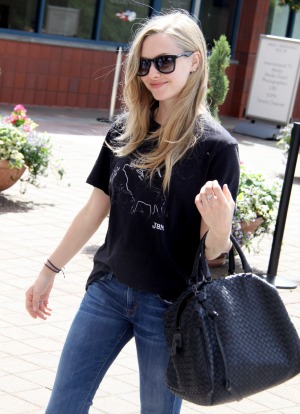 Amanda Seyfried boarded a flight on Friday, and she has proven to the world that perhaps the TSA needs to tighten up on its security because she accidentally managed to sneak a Swiss Army knife on board. Yikes!

The Lovelace star managed to get through the security checkpoint undetected before she finally realized she still had a weapon in her possession.

And instead of keeping quiet about her slipup, she decided to share this news (and potential security risk) with her fans on Twitter.

“Dear TSA: This Swiss Army knife wasn’t detected through security and I unknowingly carried it on board. Scary!” Seyfried tweeted, along with a picture of her pocketknife.

Seyfried is right; the fact that the weapon was not detected is certainly very scary!

And it’s not like the beauty needed another reason to hate airlines! Seyfried has already expressed her distaste for airlines over the years. Just last month, she apparently flew into a rage at Los Angeles International Airport after finding the pesky paparazzi waiting for her at the gates.

According to the New York Daily News, the Ted 2 star asked fans and paps at the time, “How the f*** did you know I’d be on this flight? I hate American Airlines! They always tip people off where celebrities are going to be.”

Let’s hope the TSA sorts out any faults in its security checkpoints because this story could have had a far more sinister ending.