Divergent is not to be missed, but neither are these juicy tidbits that will set you up for success before you enter the theater. Whether you’ve read the books or are going in blind, we’ve got your inside look. 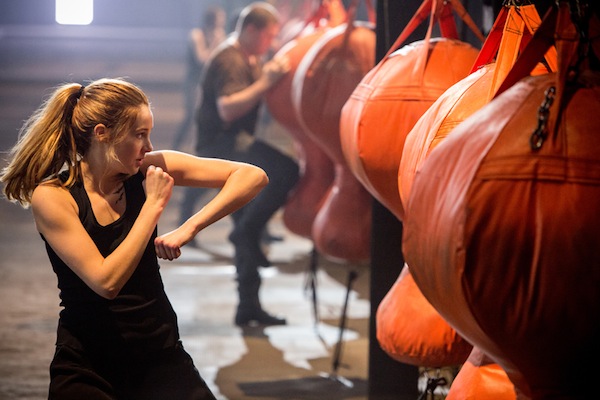 Hollywood is bolstering its roster with a string of heroines who are far from damsels in distress. Tris (Shailene Woodley) in Divergent is the next in line to battle her way through tough situations and maybe find herself some love along the way.

The movie is expected to be the next big young-adult sensation following in the footsteps of Twilight and The Hunger Games, but it isn’t a cookie-cutter repeat of these films. Divergent stands on its own, and we’ve got your sneak-peek before it hits theaters.

1. The movie stays true to the book

A movie hasn’t impressed me with how closely it keeps to the book since Disney’s Holes was released. As a fan of this trilogy, the film only made me fall in love all over again.

2. This is not Twilight

Of course, we all need a good love story now and again, and, let me tell you, the sparks fly in Divergent. Tris and Four (Theo James) have some serious, heart-fluttering chemistry. But, that being said, there is a lot more going on here than a teenage romance. Plus, Tris and Four aren’t the touchy-feely types unless they’re sparring.

3. This is not The Hunger Games

Though Shailene Woodley did tell us during her interview that she thought Katniss (Jennifer Lawrence) and Tris would be friends, at the end of the day, they’re two very different characters. Divergent is being tossed around as the next Hunger Games, and we like that because Katniss and Tris are both awesome girls any young adult should admire, but they’re two distinct characters. We don’t want to spoil the movie or the plot, but, trust us, you’ll agree.

This book is textbook dystopian with a twist. But the dystopian genre doesn’t just mean a plot that’s set in the future. Think the opposite of a utopia. Initially and from the outside, the city where Divergent takes place seems happy and peaceful, but it quickly becomes apparent that the government guises what is good for the people as a ploy for power.

The people in the society of this book are split into five factions based on their personalities. Tris chooses to be in the faction called Dauntless, which are the cutthroat, adrenaline junkies who aren’t afraid to start throwing fists if someone angers them. None of these characters is a Goody Two-shoes, and you’ll leave this film wishing you were as awesomely bad.

The Dauntless take the words bravery and courage to a whole new level. Tris finds herself in an extreme and unfamiliar world, and she must rise to the challenge. As she does, she discovers everything about her world may not be as it appears.

Lots of people, maybe even more than in The Hunger Games. Though the deaths are toned down for the movie, expect to be on the edge of your seat. No one is safe, especially if he or she is part of Dauntless.

8. The love story takes a back seat

There is a real and awesome story line that’s enjoyable for guys and gals. Sure, the love story unfolds along the way in the midst of action, fighting and plot twists and turns, of course.

TRAILER: Is Divergent the next Hunger Games? >>

9. Tris is a heroine to root for

Tris knows what she wants, puts her mind to it and is determined to succeed. We can all stand behind a heroine like that. Plus, we love the trend of young-adult books and movies that present a girl who doesn’t need a man. In fact, that’s the last thing on Tris’ mind. Even after she initially meets Four.

10. The fighting is futuristic

When we interviewed the cast, they told us all about training for the film. Theo James told us the film wanted to make the fighting look familiar but with a futuristic edge. That’s why you see Tris with her arms raised horizontally instead of the traditional fist-up fighting stance (as pictured above).