Lady Gaga let her friend throw up on her — on purpose — but Demi Lovato doesn’t see the art in glamorizing an addiction. 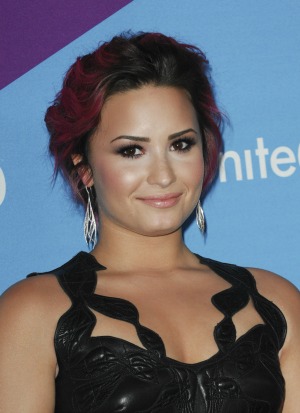 Lady Gaga pulled a (very disgusting) stunt during her SXSW set in Austin on Thursday, but at least one person is not happy about it.

Gaga was riding a bull with a friend and had that friend throw up on her. Apparently it wasn’t an accident, but an act that was planned by the two. No matter how gross, the world is talking about the stunt, with some even calling it “art.”

“I’ve known Millie [Brown] for I think, like, five years now and we’ve actually collaborated before. She was just in town and so we thought we would collaborate again,” Gaga told the audience at her SXSW keynote.

One person not happy about the act is Demi Lovato, who shared her frustration with Lady Gaga on Twitter.

Sad… As if we didn't have enough people glamorizing eat disorders already. 😣 Bottom line, it's not "cool" or "artsy" at all.

Lovato has faced drug problems and an eating disorder in the past and felt that Gaga’s stunt went too far to glamorize something that is not glamorous at all.

Would you let someone bring a needle and shoot up on you? Addiction is addiction.

Gaga’s fans on Twitter began to criticize Lovato for her comments. But Lovato said she wasn’t being a “hater,” as they said, “but if someone has to come forward and say it… I’ll take the heat for it. Putting the word ART in it isn’t a free card to do whatever you want without consequences.”

Gaga spoke more about the performance while at SXSW and was happy it has received the attention it has.

Tell us: Was Lady Gaga’s performance glamorizing eating disorders, or do you see it as art?