Jared Leto is fighting for what he believes in, and is offering his voice of support for the cause in Ukraine. 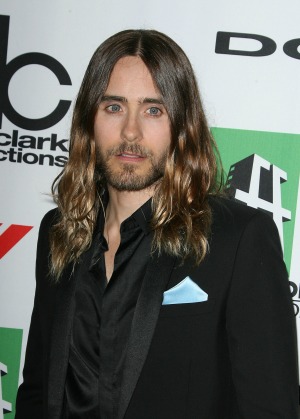 Numerous celebs have come out to support Ukraine protestors, and Jared Leto has again shown whose side he is on. For the actor and rock star, whose band was scheduled to play in the country, canceling because of the clashes wasn’t an option.

Leto made the trip to Kiev to play a show with Thirty Seconds to Mars, but he wanted to show support for those fighting.

“Other bands have canceled their shows, but there was… no f***ing way Thirty Seconds to Mars wasn’t going to be here in this beautiful city, in this great country here tonight,” he said, according The Hollywood Reporter.

Thirty Seconds to Mars not only played in the country, but Leto did what he could to show his support for those involved in the uprising.

“You guys are in the midst of something really beautiful and it may be difficult, but there’s no price too high to pay for the privilege of owning yourself,” he said.

He also posted a photo on his Instagram page, with the caption “Independence Square Ukraine.”

The actor hasn’t been shy about his support for the cause. During his Academy Awards acceptance speech (for his role in Dallas Buyers Club), he made a mention of the Ukrainian crisis.

“All the dreamers out there around the world — in places like Ukraine and Venezuela — as you struggle to make your dreams happen and live the impossible, we are thinking of you,” he said.

While Leto was in Kiev, he made sure to understand the conflict and what they are fighting for. He also visited Maiden Square in Kiev, where nearly 100 people died in an uprising last month. According to THR, Leto also met with crowds and visited shrines built for those lost in the clashes.