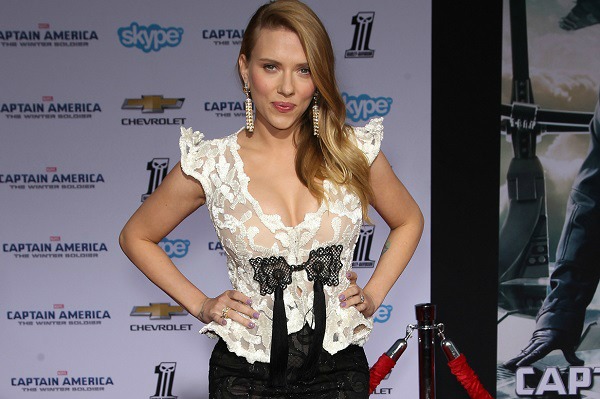 Thursday night was the big red carpet premiere of Captain America: The Winter Soldier in Los Angeles. While many Marvel fans were clamoring to see the latest superhero movie, the paparazzi were eager to capture the debut of something else: Scarlett Johansson‘s baby bump.

The 29-year-old actress has not officially confirmed that she is expecting. According to Lainey Gossip, journalists at the press junket for the film were specifically instructed not to ask about her reported pregnancy.

VIDEO: Scarlett Johansson teaches us how to play the game of love >>

She plays Black Widow in the Marvel superhero franchise.

The photos from last night’s red carpet show Johansson looking fit and shapely in a Giorgio Armani Privé top and skirt with Christian Louboutin heels. There appears to be no sign of a baby bump… yet.

However, there might be one telltale sign of pregnancy and that was quite evident in her cleavage in that gorgeous outfit. The Avengers actress was glowing and happy all night on the red carpet at the El Capitan Theatre in Hollywood.

The news regarding the star’s pregnancy first broke in early March. Johansson is engaged to Frenchman Romain Dauriac. The engagement occurred about six months ago, but it sounds like the baby will arrive before any nuptials. 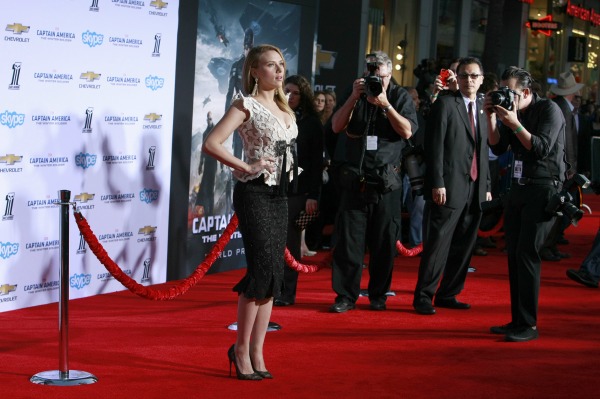 She told Good Morning America in January, “I’m not doing any wedding planning. Being engaged is an exciting time to enjoy and to really savor.”

Even if she isn’t confirming the pregnancy just yet, it looks like others are. Marvel Studios president Kevin Feige spoke to Collider about the big news.

He said, “Well, my first reaction was I was very happy for her and very excited for her. My second reaction was, we’ve gotta move some pieces on the chessboard around schedule-wise. But we didn’t change the script at all, which is sort of the most important thing for us in terms of the story line.”

If anyone knows that she’s pregnant, it has to be the guy employing her… even if he does have a big mouth.