After reports surfaced that they were having relationship problems, Kate Hudson and Matt Bellamy may be trying to work on their issues. 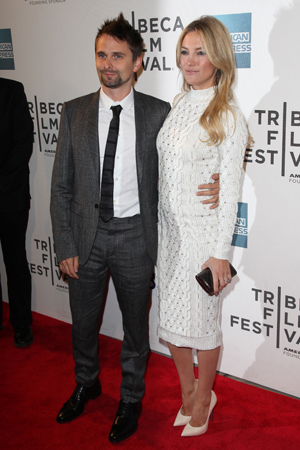 Kate Hudson and Matthew Bellamy have reportedly been having relationship issues lately and were possibly headed for a split. However, the pair is now supposedly working on their problems and may get married after all.

Recent reports revealed that Hudson and Bellamy were rethinking their engagement after some issues surfaced due to distance and schedules. But, sources told Us Weekly that the couple has been talking a lot and reuniting whenever they can to talk and spend time with their 2-year-old son, Bingham.

Are Kate Hudson and Matt Bellamy ever getting married? >>

“They went on dates, and they’re talking every day to work through things,” the source said. “They’re committed to being great parents and want to stay together for Bing.”

Last week, Bellamy, 35, flew to California to see Bingham and spent the night with the child and Hudson, 34, at their beach house. Then, Us claims that the Something Borrowed star will go to London in mid-March to see her fiancé while he’s there recording a new album with his band, Muse.

Meanwhile, as the couple try to mend their relationship, Bellamy’s pal remains pessimistic about a positive outcome to their efforts to stay together. “They’re afraid to end it. I don’t think there is any way it will last.”

Rumors that Hudson and Bellamy had grown apart and were on the verge of breaking up surfaced late last month. Insiders claimed that the pair was taking time apart to try to make things work. Hudson was seen at several events without a date and not wearing her engagement ring.

She also spoke about postponing her wedding to Bellamy on Live with Kelly and Michael, saying she needed lots of time to plan the perfect wedding, and she was too busy at the moment.

Hudson added that the wedding would not be happening “any time soon.”