Taylor Swift is trying to gather votes for the 2014 Academy of Country Music Awards, and she’s doing so by creating a hilarious video that mocks her love life. 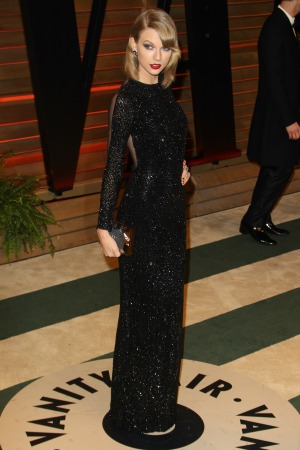 The world loves Taylor Swift because she is really just a regular person like everyone else. She makes mistakes, but she is not afraid to laugh at herself and her bad decisions.

And Swifty has impressed everyone once again with her hilarious spoof video that pokes fun at her rather colorful past love life.

The “I Knew You Were Trouble” singer has had a string of high-profile romances with Hollywood’s leading men, including Jake Gyllenhaal, John Mayer, Joe Jonas and Harry Styles, and her love life always appears to be making headlines. But the beauty is having the last laugh!

The hilarious clip titled For Your ACM Consideration was made alongside Scott Borchetta — the founder of her record label Big Machine Records — and it was done to help the country songstress gain votes for the 2014 Academy of Country Music Awards.

As Borchetta tries to ask Swift questions in the clip, she appears to have much more important things to do, such as painting her nails, playing with her adorable cat Meredith and speaking to her friend about boy troubles.

“We were done, and then like a week later, they got together and that’s like a few weeks ago and now they’re in Italy,” her friend confesses.

The “22” hit maker replies, “That’s a big jump! That’s a little fast, and I’m saying that. This guy is the reason why they made that block feature on the iPhone. You need to put his name in your phone as a weird word that’s unattractive like ‘grundle,'” the superstar jokes.

Was she playing with her cat? Watch the hilarious spoof here and find out.