Bruce Jenner sparked more sex change rumors when he stepped out earlier this week sporting long hair, a manicure and man boobs that added to his already feminized look. 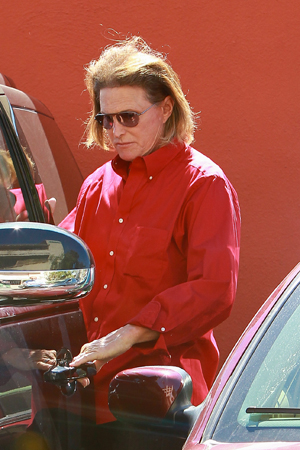 Kardashian patriarch, Bruce Jenner, stirred the feminine pot once again by going out with long hair, a manicure and man boobage in Calabasas, California, on Wednesday.

Jenner, who has been making headlines lately for his increasingly feminine looks, raised the bar further by going out for coffee and showing off long locks and long manicured nails. The former Olympian also appeared to have oddly large man breasts that poked from underneath his roomy large shirt.

The photos, which appeared on Radar Online, show Jenner walking across the street with a coffee drink, softly pulling his long hair behind the ear to keep it tidy from the wind. As he held his coffee cup, Jenner’s long manicured nails could be clearly seen. His progressively changing looks to a more feminine appearance have raised questions about whether Jenner is getting ready for a sex change.

Just recently, Jenner had his Adam’s apple shaved down to lessen its manly protruding look. The former husband of Kris Jenner also was recently seen wearing clear nail polish and a high ponytail. While they may just be part of Jenner’s metrosexual grooming routine, some experts told Radar Online that his recent procedures could indicate he is in the process of becoming a woman.

The website reported that Jenner also was having his facial hair removed by laser, another way Jenner could be showing intent on having transgender surgery. Plus, his seemingly larger-than-normal breasts could also be a result of hormone-induced feminine body parts.

Meanwhile, his family, including his older daughter Cassandra Marino, have expressed their support for Jenner’s choices.

“If that’s what he chooses to do, then I support him. It’s his life, and whatever he wants to do, he wants to do,” Marino said, not revealing any surprise at her father’s possible life-changing plans. “[Bruce has] always been a handsome guy, and he never needed to do anything. But you know, clearly he feels differently — and nobody knows how it is to be in his skin.”