What began with most of Hollywood shaking their heads in dismay has turned into an international success story about a few smart and talented nerds continuing to smash box office records with characters that are decades old. 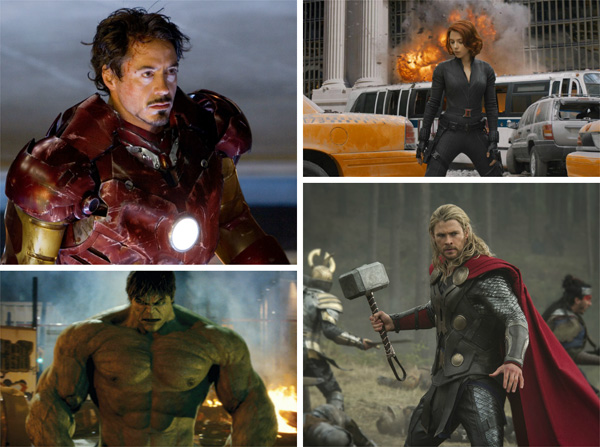 When Marvel Universe began, people had their doubts about the set of geeks groping at something big. What could possibly top Spider-Man or the Fantastic Four? Could The Hulk? Could Iron Man? There was only one way to find out. After nabbing the perfect script and pulling in the enthusiastic Jon Favreau to direct, things seemed to be coming together nicely for Marvel Universe. How do you go up against the likes of Tobey Maguire’s Spider-Man or Hugh Jackman’s Wolverine? By hiring Robert Downey Jr., of course. After securing the well-loved RDJ, those doubts dissipated, and what happened next was a series of successes.

Iron Man grosses nearly $100 million in its first weekend. It also introduces Nick Fury to Iron Man’s universe, thus shedding light on the Avengers and Marvel’s plans to introduce the world to the team of often overlooked superheroes.

A throwback to the manhunt-type structure of the original comics, Hulk doesn’t see the same love as Iron Man, but he continues the story.

We learn the origins of S.H.I.E.L.D. and more about Tony Stark’s dad. Thanks to Nick Fury, we also see more of the Black Widow (Scarlett Johansson). Agent Coulson leaves for New Mexico… to meet Thor.

Coulson pulls in Thor as part of the Avengers. We also meet Hawkeye. Though better suited for the Olympics than for superheroics, Hawkeye will eventually find his place among the Avengers. (Right?)

Fans spend more time with Tony Stark’s dad, going back in time to meet him. Captain America is a much better defensive player than offensive, but with his star-spangled uniform, he’s the picture of patriotism and exactly what 1940s America needs. He’s the first Avenger, and he’s a dang good one.

The Avengers marks the first time we see the team assemble together to fight evil. The evil at hand? Thor’s brother, Loki, come to subjugate the Earth. He may be a god, but he’s no match for the Avengers. He does, however, quickly become a fan favorite. Also worth noting: Mark Ruffalo takes over as The Hulk and makes that big green rage machine a lot more likable.

Grossing more than $1.2 billion at worldwide box offices, Iron Man shows his place as king of both the real world and the Marvel Universe. The third installment was the highest-grossing movie in 2013, even beating out the other Marvel release…

The God of Thunder returned in 2013. What happens when he must team up with his backstabbing and mischievous brother in other to save Planet Earth (and Jane)? Another Marvel movie grosses more than half a billion dollars, that’s what.

Next up for the Marvel Universe is The Winter Soldier, which releases in a matter of weeks. Cap and the Black Widow will team up to recruit a new Avenger, but not before running into their fair share of foes.

Later this decade, Marvel Universe will continue its legacy of making the best comic book-inspired movies in our galaxy. So far, the following movies are already in the works:

This timeline is just the beginning of what there is to know about the Marvel Universe. To hear about Marvel’s very beginning as an independent studio and becoming a studio that continually Hulk-smashes the box office, tune into ABC on March 18 for Marvel Studios: Assembling a Universe. It’s utter geeky brilliance.

Want more TV and movie news? Sign up for our newsletter! >>