Scarlett Johansson is considered one of the most sexiest women alive, so it is no wonder that men are falling at her feet. However, she claims it is her baking skills that really do the trick! 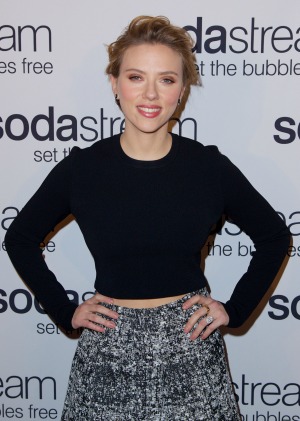 Scarlett Johansson is quite possibly the most beautiful woman alive — ever. So it’s not surprising that she would be getting marriage proposals left, right and center.

Although, Johansson claims it’s her skills in the kitchen that really win men over.

In a recent interview with the Metro newspaper, The Avengers actress revealed that she knows the way to a man’s heart is through his stomach.

“My signature baked good is a vegan banana chocolate chip muffin — I can modestly say I have had marriage proposals from those,” Johansson confessed.

That’s if the muffin mix even makes it into the oven!

“Licking the spoon is the best part. Sometimes the mix will barely make it to the oven,” the star joked.

To the dismay of most men, the beauty is officially off the market and happily engaged to French journalist Romain Dauriac. But before Dauriac was even on the scene the actress was married to Ryan Reynolds, so perhaps her muffin mix really does have a secret ingredient because she really has no problem getting men!

However, Johansson’s life has not been all fun and jokes — she did experience an unpleasant hacking incident in the past that resulted in the internet exploding with nude pictures of her.

There’s no doubt the ordeal was a blow to the Don Jon actress’ confidence. So how is she coping with the fact that her life is so very transparent?

“Several years ago I had that whole awful hacking incident, which made me feel so paranoid. But I am trying not to let it affect me,” Johansson confessed to the paper.

“The trappings of this job mean I always feel like I’m protecting not just my personal life but my family, my partner, my lifestyle, my address, everything.”

Let’s hope nothing quite as traumatic happens to Johansson in the future — we far prefer her baking stories!