Robin Thicke’s marriage may be on the rocks, but he decided to celebrate his 37th birthday in style with Leonardo DiCaprio. Although, the pair did enforce a strict “no girls” policy! 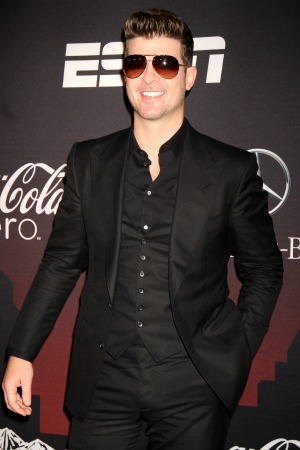 Things have not been going Robin Thicke’s way in recent weeks, so it’s good to see he’s found a good friend in Leonardo DiCaprio.

The “Blurred Lines” hit maker has made no secret that he is desperate to get his wife Paula Patton back since the pair announced they were separating after nearly nine years of marriage.

Since the couple announced their decision to call time on their marriage, the crooner has been pulling out all the stops, including public declarations of love for Patton.

Reports say things between the Baggage Claim actress and Thicke appear to be progressing, and divorce may no longer be on the cards. However, despite the problems the singer may be facing in his personal life, he celebrated his 37th birthday in style!

According to People, Thicke was spotted with the The Wolf of Wall Street star and other male friends enjoying a night of drunken partying for his birthday at the DBA nightclub in West Hollywood, California, on Monday night.

A source revealed to the publication, “[Robin was] in a great mood, enjoying time with his friends.”

However, while Thicke’s birthday entourage enjoyed multiple drinks, including tequila pineapples and Amstel Lights, they enforced a strict “no girls” policy, with a source revealing, “no girls were allowed in their booth.”

The “no girls” policy is rather surprising because DiCaprio is one of the most notorious bachelors around and has hooked up with pretty much every female model to have graced the earth. And Thicke’s marriage found itself in hot water in the first place because of his flirtatious ways. So could Thicke finally be turning over a new leaf in a bid to get his lady back?