Joan Rivers and Johnny Carson hooked up? According to the Fashion Police host, it’s true, and the late Tonight Show star was on par with the rumors we’ve heard about Jon Hamm. 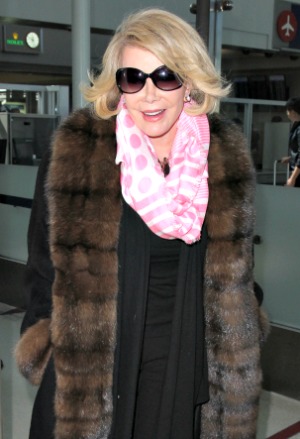 Joan Rivers has more than one comment to take into consideration regarding the supposed Johnny Carson sex tape. The 80-year-old fashion critic, who’s known for never censoring her thoughts, has opened up about the one time they had a “bounce” together.

Speaking to TMZ, the Fashion Police host spoke voluntarily about the rumored tape from the 1970s, which is said to feature the comedian with one of his four wives.

When asked if she has any interest in seeing it — the sex tape — Rivers shot back bluntly in an apparent penis reference, “I did. I saw it in real life.”

6 Times Romancing the Joan told it like it is >>

When the cameraman pursued the conversation, asking, “You and Johnny never really had…” the fur-wearing star, seen here arriving at LAX on March 9, jumped in to add, “Sex? It depends what you want to call it.”

While signing autographs for fans, she went on to add, “If you’re Johnny, you call it one-night bounce.”

Asked if she’s surprised Carson is being compared to the said-to-be-well-endowed Michael Fassbender, the woman always ready with a comic quip countered, “Oh no, Jon Hamm.”

“I had no idea that the man could stand and sit at the same time,” the mother of Melissa Rivers and grandmother added. “Who knew?”

But is Joan Rivers actually interested in seeing the Carson tape? “Yeah, I want to see which wife,” she admitted. “Obviously the wife that he made it with wasn’t the wife at the time that he made it… once you’re married, you don’t wear kneepads.”

Comedy without so much as a hint of classy, as always!

Are you surprised to hear Joan Rivers’ claim she and Johnny Carson hooked up?