Hot off the news of her surprise Mexican wedding to Jared Pobre, Stacy Keibler pregnancy rumors are already flying. 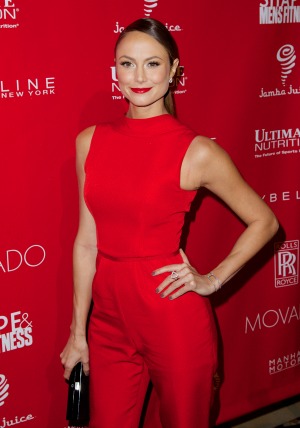 Stacy Keibler married tech entrepreneur Jared Pobre in a secret ceremony last Saturday and, according to Page Six, the wedding wasn’t the only secret the couple is keeping. Sources are saying George Clooney’s ex is with child.

Keibler, who started dating Pobre just months after she was still rumored to be living with Clooney, says family members were elated when they were clued in to the impending nuptials on the plane to Punta Mita, Mexico, last week.

“Everyone was screaming and hugging and over the moon,” she gushed to People magazine. “We felt we wanted to put our money, energy, and time into our intimate family and (share) this really special bond, special moment, and special memory just with them. There’s just so much love.”

According to People, the couple’s mothers are already excited for grandchildren and, interestingly enough, it’s what looks to be two strategically-posed wedding photos in the article that are causing all the speculation.

In one photo, Keibler is posing slightly to the side, showing the beautiful detail of the back of her dress, as well as what looks to be the start of a small baby bump. Or is that a burrito?

In the other photo (which Keibler also posted to Instagram), she has her back turned from the camera, holding the hand of her new husband. The stance completely conceals any evidence of what may be baby Pobre.

The ex-WWE star certainly isn’t wasting any time since splitting from Clooney last summer, but it’s doubtful that either the Pobre or Keibler clans are urging the new couple to pump the brakes.

Pat Keibler, Stacy’s mother, says of the couple: “As a parent all you want is for your child to be happy. We see such joy and happiness in both Stacy and Jared’s eyes when they are together. There is a true sense of harmony and love in the energy they share.”

Pobre’s mother, Gladys Lowenstein, also remarked, “The first time I met Stacy and saw the interaction between my son and her, I knew they were perfect for one another.”

Until an official statement comes from Keibler and Pobre, it looks like bump watch 2014 is on!