One month until Mad Men returns! What can we learn from the first few images of Season 7? You’d be surprised…

When Mad Men Season 6 came to a screeching halt last summer, Don Draper’s life was in ruins. He was technically unemployed, his daughter had just caught him screwing the married neighbor and his new young wife was the exact opposite of what he really wanted. Where could he go from here? As self-destructive as Don (Jon Hamm) is, it’s hard to imagine he could come out from this. But, when you hit rock bottom, there’s only one way to go, right?

That’s what new pictures from Mad Men Season 7 seem to imply. AMC and showrunner Matthew Weiner have kept every detail of the split final season under wraps. Weiner even recently told the Hollywood Reporter that when they finish filming the second half, he plans on putting it under lock and key until it’s time for the last seven episodes to air. So, what do we know about Season 7?

We have exactly three key graphics, one slow-mo video and a groovy season poster to give us hints. While we don’t know much, we think we can gather a few clues. First and foremost, Don is clearly back in the game. One picture below shows Don on a plane with his former/current boss/partner, Roger Sterling (John Slattery). Another image shows Don in an airport terminal with Peggy (Elisabeth Moss). The final image shows Don and an annoyed Megan at the airport, waiting for a cab. Interesting…

There’s one very important thing to note in all these photos and that’s Don Draper’s classic “f*** this s***” expression. Is he at the airport and on the plane because he’s working with Roger and Peggy? Or is it possible that Don has struck out on his own and they’re on their way to compete for the same client? We have less than a month until we find out.

One other speculation: The season won’t take place entirely in California. The cast and crew were spotted filming in a California airport. Everything about the official season poster officially screams California psychedelic, too. While other outlets were quick to post the vertical version of the poster, we’re more intrigued with the horizontal image. Take a look at it again. The artist, Milton Glaser, included an image of New York’s famed Chrysler Building in the background. Is that a sure sign that at least some (if not most) of Season 7 will still take place in New York City? We think so. 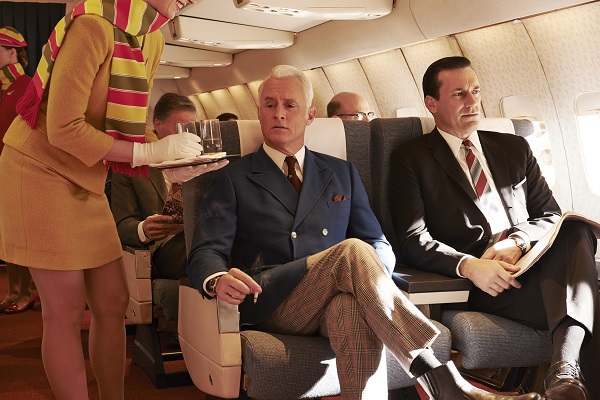 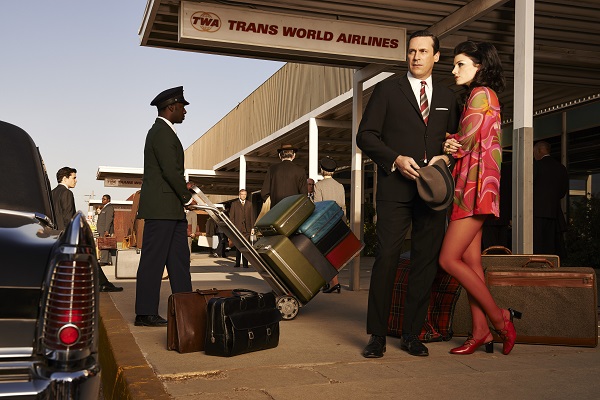 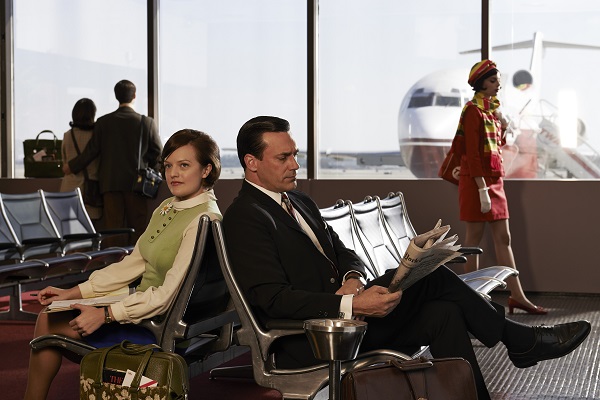 Ready to find out where these images are leading us? Mad Men Season 7 premieres on AMC on April 13 at 10/9c.