Keith Richards is passing on his childhood experiences with his grandfather in a new book for kids coming your way in September. 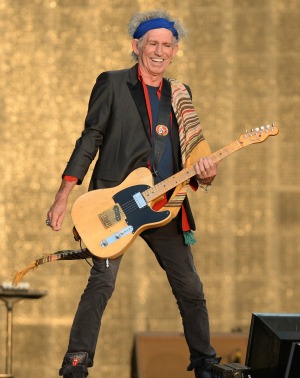 He’s a rocker, a grandfather and now a children’s book author. The publishing world had better get ready, because Keith Richards will be releasing his first kids’ book in September.

According to The Los Angeles Times, his book, Gus & Me: The Story of My Granddad and My First Guitar, will be based upon experiences with his grandfather, Theodore Augustus Dupree, who played in a jazz big band. The Rolling Stones guitarist’s daughter, Theodora, will illustrate the book with her own pen-and-ink collages. She was named after her beloved great-grandfather.

This is a familiar story to Richards’ fans since he wrote about his childhood memories with his grandfather in his memoir, Life, back in 2010.

The 70-year-old reminisced, “He showed me the first licks and chords, the major chord shapes, D and G and E. He said, ‘Play Malagueña, you can play anything.’ By the time he said, ‘I think you’re getting the hang of it,’ I was pretty happy.”

Little, Brown Books spokesperson Megan Tingley said in a statement on Wednesday, “Gus & Me invites readers to be in the room at the electrifying moment that Keith holds a guitar in his hands for the first time. We are excited to be bringing this vivid and moving story to children and families and proud to be publishing the debut of talented artist Theodora Richards.”

Fans will also receive bonus content with the hardcover edition of Richards’ book. It will include an audio CD and photographs of the musician and his family.