The movie’s about a group of single moms who come together when their kids get into trouble at school. We convinced the stars of the film to share their own favorite “bad girl” moments from their own lives. They are surprisingly relatable.

Actress Amy Smart didn’t exactly live up to her last name when she was a teen. “My girlfriends and I went to a fair that had all these little arts and crafts booths and we thought it would be awesome to take things without paying. So we got royally busted for that,” she said.

EXCLUSIVE: First look at the ladies of The Single Moms Club >>

But Smart’s rebelliousness didn’t end there. The very first time she decided to sneak out of the house, her mother somehow had a premonition that her daughter wasn’t in her bedroom.

“I’m just up the street and my dad comes racing up the hill, just panicked because my mom had a sixth sense I wasn’t in my bedroom.” Why is it that a mom always knows?

Zulay Henao, who plays Esperanza, shared a very similar story. “I decided to skip school and my mother came for me at the party. [She] showed up in her red Nissan Sentra. I was grounded for at least two weeks and I got hit when I got home.” We’re pretty sure Henao never skipped school again.

Wendi McLendon-Covey (Bridesmaids) had a bit of a different story. She said she never got in trouble at school, but at home she “threw a Rubik’s Cube at my sister and gave her a fat lip. She was asking for it.” OK, Wendi, we’re not going to argue with you! 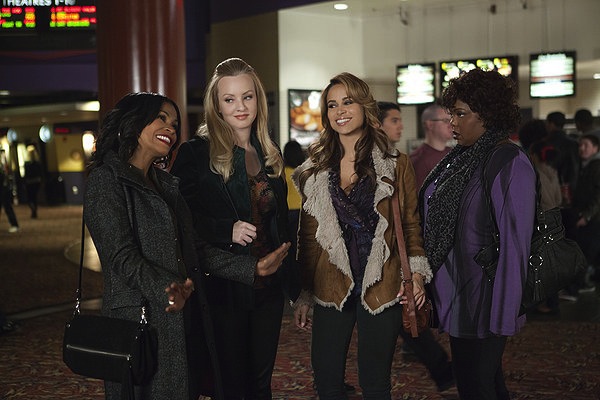 We also asked the cast about some of their favorite memories regarding their own mothers.

Cocoa Brown, who plays Lytia in the movie, said, “Last week I went to Tyler’s [Perry] Too Darn Hot party and I surprised my mom and took her. She was in there with Oprah and everybody, trying not to act starstruck, and Angela Bassett walks up and I said, ‘Mom, this is Angela,’ and I guess she didn’t realize who it was and literally mid-sentence, my mom was like, ‘Lord, it’s Tina!’ I said, ‘Mother, no, it’s not Tina.'”

Watch our video to find out what sweet treat Tyler Perry‘s mom always got him when he had to go to the doctor. We think you’ll be pretty jealous!