Shailene Woodley has been very fortunate to have locked lips with some of the most gorgeous men in Hollywood. However, when the cameras stopped rolling, which co-star did she hook up with? 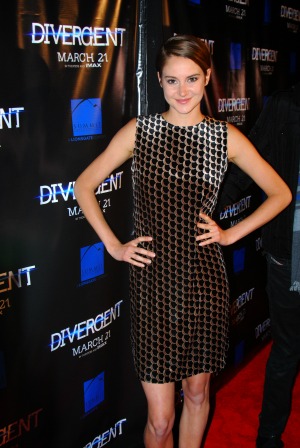 Shailene Woodley may just be one of the luckiest young Hollywood stars right now.

Not only is she going to be starring as Beatrice “Tris” Prior in the exciting forthcoming film Divergent — an adaptation of Veronica Roth’s novel — she was also fortunate enough to share several passionate kisses with pretty much all of the very hot male characters in the film.

We are very jealous of the star right now, and she has admitted to MTV News that all of the leading men she has hooked up with have been fantastic to smooch. Woodley said, “I feel like I hit the jackpot, they’re all great kissers.”

So it is little wonder why the Descendants star has been nominated for Best Kiss at this year’s MTV Movie Awards. However, having had the chance to kiss so many gorgeous men, we have to wonder if any of that on-screen chemistry has managed to trickle down into her real life?

Woodley revealed to the April issue of Teen Vogue, “I haven’t had time to think about a relationship! I literally have not had a boyfriend in almost five years. I’ve never even hooked up with anybody I’ve worked on a movie with.”

OK, so when it comes to filming romantic scenes, Woodley really doesn’t want her personal life to interfere with her work. However, what happens when the cameras stop rolling? Has she ever hooked up with one of her co-stars?

It appears so! An embarrassed Woodley revealed, “Well, that might have happened on something…”

The actress did not clarify who the lucky leading man may have been although the list of very hunky co-stars she could have chosen from includes George Clooney, Miles Teller and our personal favorite, Divergent star Theo James.

And whilst fans are thrilled that Woodley will be starring in Divergent — the franchise is expected to reach blockbuster status — she was initially hesitant to accept the role. “I said no, and everybody was shocked,” Woodley recalled.

“I asked Jennifer Lawrence, ‘Are you happy with your choice to take on The Hunger Games?’ And she said she wouldn’t change it for the world.”

“She told me, ‘There are some things — don’t make a sex tape, don’t do drugs, don’t do things in public — that you wouldn’t want other people judging you for. But this is the best decision you’ll ever make.'”