Lorelei takes control over Ward, Sif arrives to capture Lorelei, Coulson tells Skye the truth and May reveals one heck of a secret in “Yes Men.” 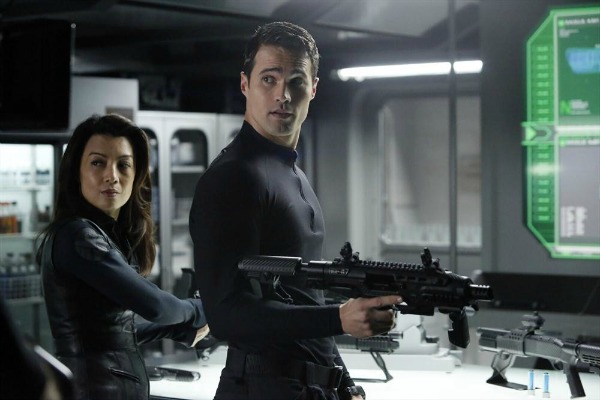 I am starting to anticipate the fact that the last 60 seconds of an episode of Agents of S.H.I.E.L.D. will probably blow my mind, but this one did that in spades.

Agents of S.H.I.E.L.D. review: Searching for the source of life >>

There was a lot going on in this episode, even before everything changed in the final minute. Skye was recovering nicely from her wound and getting understandably annoyed at being made to stay in bed all the time. Everyone wanted her to take it easy, but all she wanted was to get back to work and her training. She felt stupid for letting herself get shot and one of the things she wanted to do was get trained enough so that she wouldn’t have to depend on anyone else. Many people would have come out of an experience like hers and been afraid to be put in danger again (me included), but she came out of it determined to never be that weak again. You have to admire someone with those kinds of guts.

Lucky for Skye, a case came up where she was able to help out from her bed. When I saw the previews for this episode, I knew that Ward would be taken under Lorelei’s control, but I didn’t know that everything would go down the way it did. I thought he might turn into a mindless robot, so to see him have what looked like his own right mind as he ruthlessly took on the team was disturbing. It was equally disturbing to see him bed Lorelei, knowing that he has feelings for May. I know that those two keep denying that they are anything but sex buddies, but I’m just not buying it. May did her best to hide how she felt when she saw Ward under Lorelei’s control, but I swear I saw a flicker of emotion under there. Or maybe that’s just what I hoped I saw because honestly, if she really doesn’t feel anything for him, then I have to wonder why he’s with her.

Coulson was still trying to find Fury at the beginning of the episode, but once Sif showed up and they were hunting for Lorelei, he had his hands pretty full. When it was all over, I really liked the moment when Coulson and May had some quiet time and she convinced him to talk to Skye about everything. I thought it was so great of May to push Coulson toward doing something that might make him feel better and of course Skye took it in stride so it definitely turned out to be a good thing, right?

Well, that was until I realized why May sent Coulson to talk to Skye. She tried to pry the truth out of him and when that didn’t work, she sent him off to Skye so that she could listen in on the conversation and report back to her superiors. May has been a spy all along. Who knew? I know I certainly didn’t. I am hoping that there’s a really good explanation for her behavior but right now all I can think is that she’s a lowdown liar. I also wonder if anyone else is aware of what she’s been doing or if the entire team is in the dark about her.

Skye remarking that Simmons had a sensor for whenever her butt left the bed.

Ward telling Skye that at least she looked better than when she was dying. Such a sweet-talker, that guy.

The night-night guns getting a new name. I like “Icers” much better.

Sif taking Coulson’s request for “a little cover” quite literally.

Ward taking Sif to Vegas. Well, she did want to go to a place with a palace.

“Poor thing, he’s always getting knocked out, isn’t he?” — No kidding! He’s reaching Giles’ from Buffy the Vampire Slayer levels of unconsciousness.

Skye pointing out that at least they were alive. I kind of love the fact that it didn’t faze her.

Finding out that May was a spy. Whoa!

What did you think of this episode of Agents of S.H.I.E.L.D.? Were you shocked to find out May was a spy?