College is prime dating territory, but in your early 20s, is it really wise to scare up a husband and expect a successful marriage? 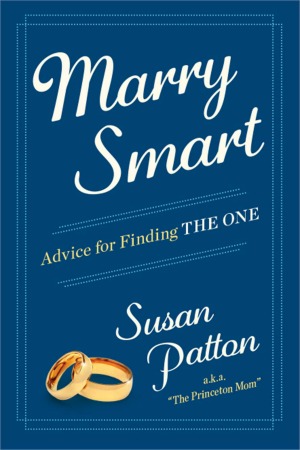 Susan Patton is a graduate of one of the first classes of women at Princeton University, and after attending a conference at her alma mater, she wrote a letter. The letter appeared in The Daily Princetonian and went viral.

Apparently, at this conference Patton met a bunch of young, single college women who were being force-fed résumé and job interview advice. All the women Patton spoke to wanted to get married — but they’d always been told career first. No one wanted to talk to them about finding a husband; résumés were more important.

Patton wondered: If older women can’t talk to younger women about marriage, who will talk to them? She wrote her letter asking this very question; now, she’s written a book.

Marry Smart: Advice for Finding THE ONE came out today, and, well, people aren’t very happy. There are some pretty obvious snafus. For one, Patton encourages overweight girls to consider cosmetic surgery. She advises women to spend 75 percent of their time planning for their marriage and 25 percent on their career. Those numbers make professional women pretty uncomfortable.

The main point of her book: Meet your husband in college. In theory, this makes sense, because at college, you will meet guys of a similar economic background and intellect. You will have things in common with boys you meet in class — but there’s the rub; you’ll meet boys.

I went to college. I am married. Did I meet my husband in college? God, no. I don’t care how hot my husband is; I wasn’t looking to settle down when I was 20, and I was way too immature to think about marriage. I was barely mature enough to do laundry.

Couples on the brink of divorce >>

Because of this college matchmaking theory, people have been tossing names around, calling Patton a “throwback,” a traitor to feminism and an elitist. I’m not here to taunt the woman. She admits in her book that she’s no expert; she only speaks from her experience. Take it or leave it.

She does make good points. She encourages planning for marriage as you would plan for a career. How many people rush into marriage and end up divorced? Maybe if they’d thought things through, they would have realized marriage was not a good idea.

8 Tips to boost your self-confidence >>

But then: “Some women have lost sight of their oldest and most-basic goals — finding a husband and having children.” Ouch. Like I said, I’m not throwing stones, but really? Content like this is what makes Patton so controversial.

Personally, I met a lot of great guys in college. There were many dating shenanigans. That said, I don’t believe people should get married until 30 (and I’m sure there are plenty of people who shake their heads at that). Seriously, though, what do we know about life in our 20s? I knew very little. My 20s were my mistake-making phase, and you don’t want your marriage to be a mistake!

My 20s were about learning to be me, not learning to be me-as-a-wife. If you spend none of your adult life alone, learning who you are, you will never know yourself. You will live to regret it, and I know; I’ve been on the receiving end of phone calls from panicked friends who married too soon.

I think there are good points in Patton’s Marry Smart, but in the long run, I’m worried her advice will do nothing but cause divorce. Dating in college? Great. Digging up a husband at a frat party? Um, no.

What are your thoughts on Susan Patton and her advice found in Marry Smart? Would you read it?

More on dating and marriage

Modern-day dating: Can you love more than one person?
10 Ways to improve your marriage daily
Myths about dating after divorce