Kristian Nairn is not only gay, but has been his whole life. Find out why we’re just now hearing about the Game of Thrones actor’s personal life. 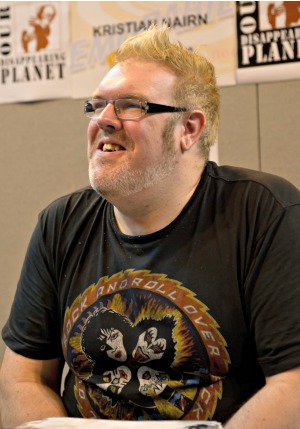 Game of Thrones has long been known to include titillating sex scenes with a tinge of incest, but did you realize one of the show’s stars is gay in real life?

Kristian Nairn, known to many as simple-minded stableboy Hodor, finally found his chance to come out publicly thanks to a recent interview with WinterIsComing.net.

Stevie Nicks has a major talent crush on Game of Thrones >>

“I’ve never hidden my sexuality from anyone — my whole life, in fact — and I’ve been waiting for someone to ask about it in an interview, [because] it’s not something you just blurt out,” the 38-year-old HBO actor explained.

Sharing his frustration at the process taking so long, the Northern Irish actor added, “I’ve tried to lead questions a few times, to no avail!

“It’s a very small part of who I am on the whole, but nonetheless, in this day and age, it’s important to stand up and be counted. I have and always will stand my ground.”

Reflecting on how his Game Of Thrones co-stars have shown their support since his public discussion of his sexuality, the man you may have also seen in the BBC TV series Ripper Street shared, “So, yeah, people have been great, on the show, but I don’t see why it would be an issue.”

Though Nairn has been fairly quiet about his personal life making headlines since the interview, he did have this exchange with another Twitter user:

@tvgeekboy haha. Yeah it’s weird to see “comes out” as the headline !! I was never in !! No one asked ! Lol

What do you make of Kristian Nairn’s long wait to share he is gay?