Ella Montgomery and Jason DiLaurentis return just in time to guarantee that the season finale of Pretty Little Liars next week is going to be explosive. 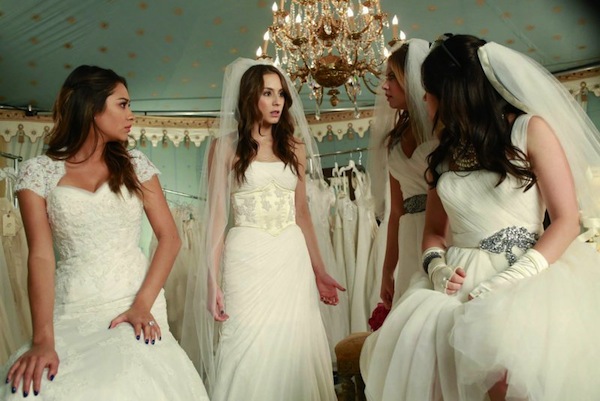 Pretty Little Liars is setting us up for some serious answers after tonight’s episode. We are just one episode away from the series finale, which the show is dubbing as the episode, “Ali tells all.” We’re cautiously optimistic, but we wouldn’t be very smart to hold our breath. The show has promised us answers before without delivering. They’d better not be getting our hopes up. Again.

Is a Pretty Little Liars star walking down the aisle? >>

Tonight is the night our favorite characters return to Rosewood. Ella Montgomery is back and sporting a beautiful diamond from her boyfriend, now fiancé, Zach.

Not to mention, Jason DiLaurentis is out of rehab. Or is he??? Thanks to Dean, Spencer’s rehab counselor, we learn the clinic Jason claimed he was recovering at has actually been closed for two years. So where was big brother all this time? Maybe helping Ali? (More on that below.)

We knew this episode was just going to be a cleverly disguised plot to get Aria (Lucy Hale), Hanna (Ashley Benson), Spencer (Troian Bellisario) and Emily (Shay Mitchell) in new outfits with a splash (aka wedding dresses). What we didn’t expect is how little it would actually play into the entire episode. The show pretty much just put the girls in wedding dresses so Spencer could go tromping through the forest getting hers dirty. We didn’t see the girls walk in the show. We didn’t hear anything about the cause they were supporting or how it related to brides. Nor did we even get a glimpse of the event other than the girls backstage. Cop. Out.

We don’t think Ali’s mom is A. In fact, we think Mrs. DiLaurentis is helping out CeCe and that’s who Spencer saw in the woods. It seems like Jessica is pretty convinced Spencer was somehow involved in her daughter’s murder. But she may just know Ali is alive.

The police stop by her house to tell Mrs. D that Alison’s body is being exhumed so they can confirm her death and boy is Ali’s mom upset by the news. Could be she doesn’t want to have to rehash bad memories, but we think her behavior is more than a little suspicious.

That theory was called into question though when the girls spoke to Ali on the phone, who begged them not to tell her mother anything.

Aside from pleading with the girls not to tell anyone anything (typical), Ali gave them an address where they could meet her so she could explain what happened the night of her disappearance.

The girls arrive at the address, which just looks like a dingy old storage facility. It’s empty until someone opens the door. We don’t see who’s on the other side. But our guess, based on internet rumors, is that Noel Kahn has returned to the show. If we hadn’t read those articles though, we would have guessed it was Jason at the door. So many reemerging faces!

Who do you think the girls run into while looking for Ali? Will Ali tell all next week as the show promises?