Between puberty, blackouts and possibly being a murderer, Norman Bates has a lot on his plate. Unfortunately, the women in his life continue to pile on the drama. How long will it be before he cracks under the weight? 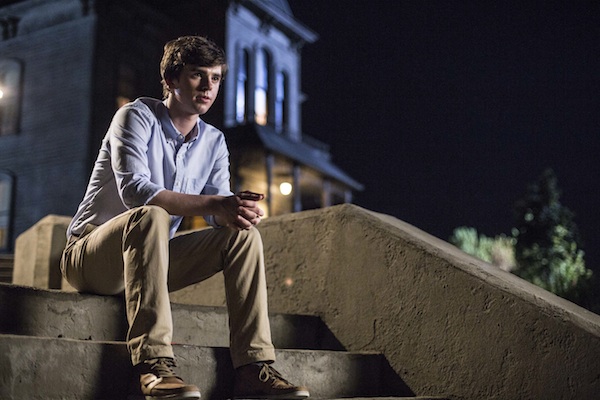 Norma Bates (Vera Farmiga) is by far the most embarrassing mother on TV. Not because she has a tendency to humiliate Norman Bates (Freddie Highmore) in nearly every public situation, but because she has a knack for embarrassing herself, as well. With each episode she seems to be falling further into a desperate pit that makes her hungry for any kind of attention. Whether the attention comes in the form of sexual attraction from disturbed men, or weird and lengthy touches from her own son, she just can’t get enough of it.

Missed Bates Motel Season 2 premiere? No problem! We have the review right here >>

This week she actually auditions for a local musical and gives a rather impressive vocal performance for which she receives a round of applause. While we all enjoy nice accolades time and again, the look on her face makes it clear that other people’s approval is about the only thing that can satisfy whatever is missing in her twisted soul.

Poor Norman. His mother is most desperate for his attention and while he’s trying to be an independent teenage boy and find his own identity (especially with the ladies) Norma won’t let him off her leash. Even though he’s destined to become a deranged slasher villain, I almost feel bad for the kid.

In other disturbing news, young Bradley admits to killing her father’s murderer and hides out in Norman’s dead animal-filled basement. Norman, being intoxicated with the young beauty, helps her escape by buying hair dye and a ticket to Boise. She may be jumping ship to get away from the men who will certainly want to kill her, but I have the feeling that the pull of her small town and Dylan’s piercing blue eyes will draw her home very soon.

Last but not least, Miss Watson’s murderer has been arrested. Kyle, one of two men believed to have had sex with Miss Watson before she was murdered, has taken the lead as suspect number one. But, let’s not put too much weight on this decision. It’s early in the season and things are shaping up to be a little more complicated than they seem.