Juan Pablo picked Nikki as his new leading lady because he likes her “a lot.” But we think it’s far from true love this season on The Bachelor. 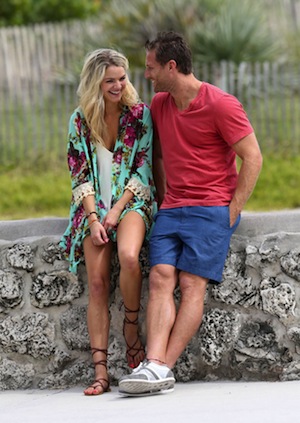 Even Chris Harrison was raggin’ on The Bachelor on Monday night after Juan Pablo and Nikki kept tight-lipped on their new and budding relationship. It left everyone feeling awkward and confused. As Harrison put it, we’re all OK with moving on.

But first, let’s rehash the reasons Nikki and Juan Pablo have left us all uncertain about what the future will hold for these two.

Who wins The Bachelor? Nikki vs. Clare >>

Juan Pablo refused to say anything about his feelings for Nikki other than he likes her a lot. A little more descriptive feeling would have been helpful, but the still-bachelor wouldn’t spill any details on their developing relationship.

Juan Pablo got a lot of flak, especially from the new Bachelorette Andi Dorfman for saying, “It’s OK,” all of the time in response to everything. On Monday night, he mixed things up. Instead of, “It’s OK,” he said, “It’s fine.” A lot. The word OK wasn’t the problem, though; the problem was the lack of feeling and explanation. It still wasn’t there.

Juan Pablo even called Harrison out a few times during the After the Final Rose special because Juan Pablo accused him of interrupting him. There’s a difference between being honest and being abrasive.

It wasn’t just the audience that was unsure. Harrison was at a loss for words on Monday night when Juan Pablo and Nikki would do nothing but stick to each other like glue. She stayed silent. He said, “It’s fine.” And we all stared awkwardly in return. It’s great to want to keep things private, especially after all the bad press Juan Pablo has received, but he signed on to The Bachelor to talk about his feelings. He doesn’t get to take it back when he decides he no longer likes where it’s led him, right?

5. Nikki was silent during the finale

Once Juan Pablo came out on stage and started to defend himself, Nikki just kind of sat there until Harrison forced her to speak up. When she did, she seemed genuine with her explanation that they wanted to keep things private. We just don’t know if we believe her. (See No. 9 for a solid reason.)

The host was full of hilarious remarks in response to Juan Pablo’s closed-off nature. When even the host is so uncomfortable he no longer knows where to go in the conversation, you know things are confusing.

7. He doesn’t regret anything

There were quite a few instances that put us off in the finale alone. What were those dirty words Juan Pablo whispered to Clare? Avoiding the topic only made him look more guilty. Was it really necessary for him to make the remark about being relieved that he sent Clare home? That’s just rubbing salt in the wound. There’s a difference between not regretting things and not owning up to your actions.

The Bachelor‘s most popular bachelors >>

OK, so Juan Pablo doesn’t love Nikki just yet, but he didn’t even really give us anything about how amazing she is. Or that their relationship is headed in that direction. Instead, he acted like they had only just met, didn’t know each other at all and were in the beginning stages of a relationship. To each his own?

While Juan Pablo is off trying to sort through his feelings — we hope — Nikki is certain that she loves the man. She wants to be with him and marry him. It’s easy to feel sorry for her because while her feelings have developed, he’s stagnant. Whether the feelings are there or not, it doesn’t do anyone any good not to share them. At least share with each other.

Sean put it best: Juan Pablo signed up for a very public love story. He can’t go back on that agreement now. It’s way too late. But that hasn’t stopped him from trying to hide any of his feelings or plans with Nikki.

Did you think The Bachelor season finale was awkward? Will Juan Pablo and Nikki last?