Steve Irwin’s final moments have been revealed by the man who was with him as he drew his last breaths. 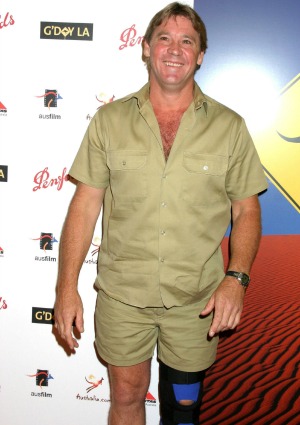 In an interview with Britain’s Studio 10, Lyons described how the crew had followed an 8-foot stingray in their inflatable boat for quite some time before Irwin decided he wanted a shot of him swimming up behind the animal. Lyons joined him in the water to film the encounter.

“All of a sudden it propped on its front and started stabbing wildly with its tail, hundreds of strikes in a few seconds,” Lyons said, adding that the stingray probably thought Irwin’s shadow was that of a tiger shark.

“It wasn’t until I panned the camera back [and saw] that Steve was standing in a huge pool of blood that I realized something had gone wrong.”

“He had a about a two-inch-wide injury over his heart with blood and fluid coming out of it,” Lyons said. “He was in extraordinary pain. [The stingrays] have got venom on their barb, so I’m sure it was excruciatingly painful.”

Bindi Irwin at 14: The Crocodile Hunter’s girl grows up >>

Lyons also said that even if Irwin had medical intervention right away, his injuries were too severe to save him.

“Even if we’d been able to get him into an emergency ward at that moment, we probably wouldn’t have been able to save him because the damage to his heart was massive,” he said.

“As we’re motoring back, I’m screaming at one of the other crew in the boat to put their hand over the wound and we’re saying to him things like, ‘Think of your kids, Steve. Hang on, hang on, hang on.’ He just sort of calmly looked up at me and said, ‘I’m dying.’ And that was the last thing he said.

“We hoped for a miracle, so I literally did CPR on him for over an hour before we got him to… the medics,” Lyons explained, but it was too late. Irwin was pronounced dead at the scene.

While a video of the entire ordeal exists — Irwin had a firm rule that no matter how severe the injury, the crew kept filming — Lyons said he does not know where it is and hopes it is never released.

“I don’t know what’s happened to it and I hope it would never see the light of day,” he said.