Could there be hope for Robin Thicke and Paula Patton’s marriage after all? If the latest reports are true, then the actress may be warming to her husband’s efforts to win her back. 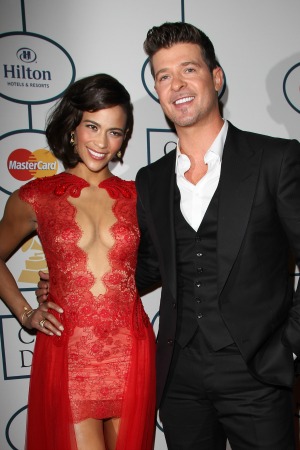 The world is really starting to feel a little bit sorry for Robin Thicke in his bid to win back the love of his life Paula Patton.

The “Blurred Lines” hit maker is making no secret of the fact that he does not want to live his life without his wife of nine years, and he desperately wants to try and give things another go.

The couple’s romance hit rocky ground when it was rumored that Thicke had been flirting with other women behind Patton’s back, and this was followed by a statement that the couple released on Feb. 24.

They told People, “We will always love each other and be best friends, however, we have mutually decided to separate at this time.”

Since the announcement of the childhood sweethearts’ separation, Thicke has been pulling out all the stops, and it seems his bid to win back his wife may just be working.

According to TMZ, the 2 Guns actress may be willing to give her marriage to Thicke another shot. Sources revealed to the website that, “They talk constantly, but she was very clear the day she dumped him … she wanted a divorce.”

Apparently, Patton has since changed her mind and is now more open to discussing the possibility of making their marriage work. However, whilst phone calls between the pair appear to have been productive, Thicke apparently needs to rethink his onstage pronouncements of love because they are apparently not impressing his beauty.

The singer first dedicated the song “Lost Without U” to Patton during his concert in Fairfax, Virginia, on Feb. 27, and he then told his fans, “For y’all that don’t know, me and my wife separated, but I’m trying to get my girl back.”

This public show of affection was then followed by an emotional rendition of Al Green’s “Let’s Stay Together” on March 2 at the Borgata Hotel Casino & Spa in Atlantic City, New Jersey, and Thicke took the show as an opportunity to gush about his wife.

He told fans, “Never stop believing and you never stop loving. And even if it is over, make sure you treat each other right. Treat your family right. Take care of your mom, take care of your kids and good things will come to you. Just keep believing that God is good.”

Oh, and it’s Thicke’s birthday today, so let’s hope his lovely wife cuts him a break!