As controversies about Juan Pablo Galavis abound, the Bachelor was in Las Vegas, Nevada, to watch a boxing match over the weekend. The reality TV star also visited a chapel two nights before the show’s finale is set to air. 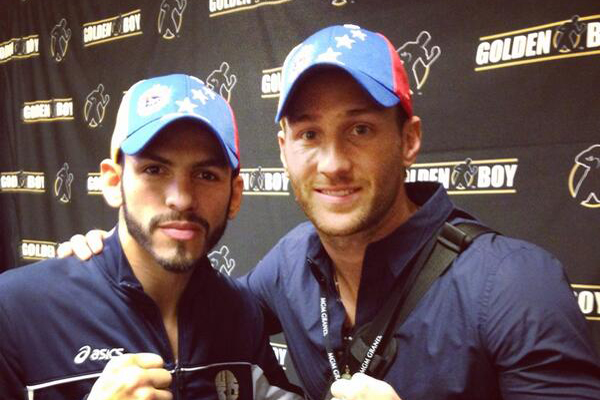 The Bachelor: Are Sharleen and Juan Pablo back on? >>

Galavis decided to document his whole trip on Twitter. Mainly there to watch fellow countryman Jorge Linares of Venezuela take on Nihito Arakawa in a boxing match, Galavis also jokingly took a photo of the MGM wedding chapel.

In the photo, Galavis stands in front of the chapel smiling and pointing to the entrance, seemingly teasing fans with what might be a hint to how the show ends in the final episode.

Galavis traveled with two pals who accompanied him to the fight and later to a dinner with 10 members of Linares’ boxing team. The group ate at Joe’s Stone Crab, staying at the eatery for more than two hours.

“It was him and a bunch of guys who were a part of the Venezuelan fighter’s team and a couple of older ladies with big hair,” a source for People magazine said.

CONGRATS to my BRO @JorgeLinares for that WIN tonight… pic.twitter.com/LovIklVxXl

After the meal, Galavis and his two friends went to Beacher’s Madhouse nightclub for a short visit. The 32-year-old The Bachelor star didn’t drink anything, but he posed for photos with fans for about 30 minutes. Then the three friends took a stroll around the MGM Grand’s casino where Galavis posed for more photos with anyone who would request it.

After several recent controversial comments, Galavis has become a polarizing figure among The Bachelor fans. Some call him the worst Bachelor ever while others think he’s just honest and possibly misunderstood because of his Spanish language barrier.

After an eventful season, Galavis will choose between his two finalists, Clare and Nikki, on Monday night, and will most likely propose to one of them, given that it all goes well. However, as with many seasons before this one, several rumors have claimed that the current Bachelor does not propose to anyone at the end of the show.