After a public and painful split from former love George Clooney, Stacy Keibler finds her soul mate in Jared Pobre. The two married in a beautiful beach ceremony on Saturday. 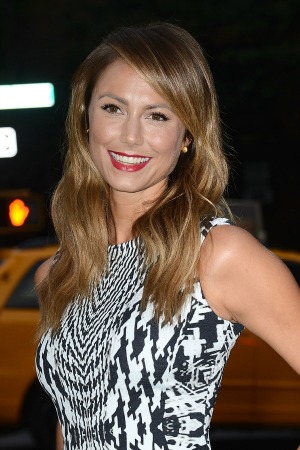 Stacy Keibler, 34, wed beau Jared Pobre yesterday in a small sunset ceremony, according to People magazine, and the beautiful bride is already gushing about marriage.

Is Sean Penn planning his wedding to Charlize Theron? >>

“My happiness is indescribable!” Keibler said of Pobre, 39, who is the CEO of Future Ads. “Marriage is the ultimate bond of love and friendship. It means putting all of your faith and trust into a person that you can’t help but believe is your soul mate: someone who has all your best interests at heart; someone hand-picked for you, to help you grow and be the best person that you can be. Jared is all of this for me.”

Judging by her poetic musings, the former WWE sex kitten certainly has more than rebounded from her recent high-profile long-term relationship to George Clooney. Keibler and Clooney split just last summer, amid rumors that she was unhappy in a sexless relationship. It was also painfully clear to the public, family members and probably Keibler that the famous pair were never going to get hitched.

But it seems that Clooney is the last thing on Keibler’s mind at the moment. Although Keibler and Pobre only started dating this past fall, the two have been close friends for more than five years.

The ceremony came as a pleasant surprise to friends and family members who thought they were on a simple vacation, though Keibler and Pobre say they had been planning the nuptials for months. “We both felt strongly that our ‘love day’ should be intimately special,” said Keibler, “and that’s exactly what it was. It was a blend of romance, tranquility, natural beauty, bonding and overwhelming love.”

If career motivation and common lifestyles serve as an indication of marital success, then this dynamic duo have this thing on lockdown. Keibler is known as “The Legs of WWE,” and her gams are rumored to be worth millions. Pobre’s interactive firm was started in 2001, and by 2009, it was among the fastest growing companies in the country.

Congrats and best wishes to the beautiful couple!