Last night, the first lady hosted a star-studded celebration of female soul singers. Besides one embarrassing misstep by her husband, the talent-filled event was a success. 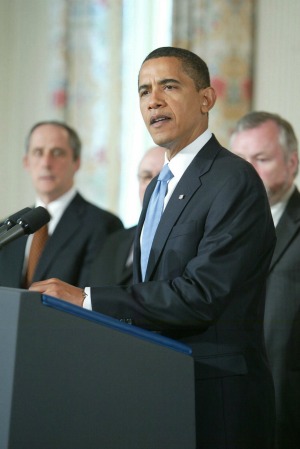 There was a whole lot of girl power up in the White House last night! Michelle Obama hosted the Women of Soul: In Performance at the White House concert, which was a scheduled part of Women’s History Month. “As someone who shares this house with brilliant, creative, talented, somewhat stubborn women,” Barack Obama said, according to ABC News, “I think Women’s History Month is the perfect time to honor a few more: the women of soul.”

According to CBS News, the event was a huge success — aside from one teeny tiny little gaffe by Mrs. Obama’s husband while he was paying tribute to the great Aretha Franklin. “When Aretha first told us what R-S-P-E-C-T meant to her,” Obama said, then paused to wait for the eruption of audience laughter to cease. “She had no idea it would be a rallying cry for African-Americans, women and then everyone who felt marginalized because of what they looked like or who they loved,” he continued. Despite the flub by the president (who also paid tribute to the late Harold Ramis recently), the overwhelmingly positive message was well received.

Another highlight of the concert was the powerful voice of a young singer relatively new to the music scene. Ariana Grande (who has shown the world she has diva potential) seemed a bit nervous to take the stage in such legendary company, but she proved that her voice can hang with the big girls’ as she brought the (White) House down with Whitney Houston’s “I Have Nothing.”

Franklin didn’t seem to mind Obama’s misspelling of one of her most famous songs. As she took the stage, she declared she was ready “to party.”

Not wanting her POTUS husband to be alone in his embarrassment, Michelle (who we already know loves to party) created a blush-worthy moment of her own. “Find your own voice and then be proud of it,” the first lady said after referencing a comment by LaBelle about taking chances and singing her butt off. “And then sing your butt off. Or work your butt off. Or whatever you do, do it until your butt comes off. OK, that quote is going to be kind of funny in the papers. Already know it.”

The concert airs April 7 on PBS.