Is Miley Cyrus the one girl Katy Perry kissed and didn’t like it? The pop singers have been engaged in some playful disses on Twitter, and Perry has had the last laugh. 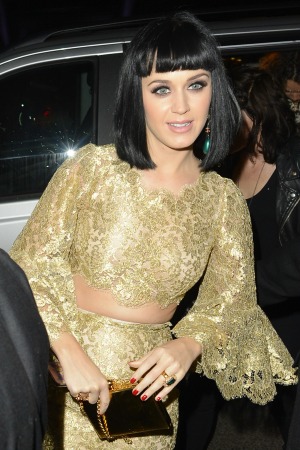 There was a social media frenzy when Katy Perry and Miley Cyrus nearly engaged in a smooch at Cyrus’ recent concert on her Bangerz tour. However, despite the “Wrecking Ball” hit maker’s efforts, Perry really did not seem keen.

Was this the one time the “Roar” singer kissed a girl and really didn’t like it? The comments that followed certainly suggest so as the brunette beauty revealed on Tuesday to the Australian Jules, Merrick & Sophie with Mel B radio show, “I was just going in for a ‘hey, girlfriend’ kiss.”

But when it was clear the twerker wanted something a little more steamy, Perry responded, “I saw that and that’s when I walked away. I was like, ‘That tongue is infamous. I don’t know where it’s been.'”

However, Cyrus was not going to let that comment pass without responding, so she hit back with some questionable remarks about Perry’s newly ex-boyfriend John Mayer — Mayer is known to have hooked up with Taylor Swift, Jessica Simpson, Cameron Diaz and Minka Kelly, among many, many others.

Cyrus wrote on Thursday, “Girl if ur worried abt where tongues have been good thing ur ex boo is ur EX BOO cause we ALL know where THAT been (sic).”

However, the “Dark Horse” songstress has taken her pal Cyrus’ comment in jest and cheekily responded, “Oooo gurrrl I’m gonna give you the BIGGEST spanking when I see you in the UK bb! (sic)”

So, first kissing and now spanking? It’s good to see that Cyrus and Perry at least have a sense of humor.