Not only is Ireland Baldwin sporting a new lilac hairdo, she also has split from her surfer beau Slater Trout. Why is she making all of the changes? 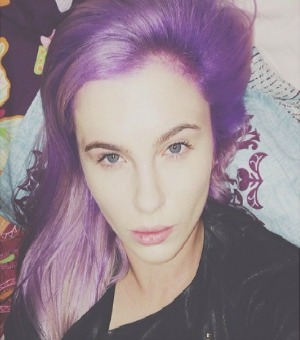 Many men will be rejoicing at the latest news that model Ireland Baldwin is newly single. That’s right, according to People, the 18-year-old model has split from her boyfriend Slater Trout.

The former couple met via social media after they had been introduced by a friend in the fall of 2012, and Baldwin and her beau appeared to be very smitten with each other.

And the cute pair just recently made their first red carpet appearance together at the 50th anniversary of the Sports Illustrated Swimsuit Issue event in Los Angeles, California, on Jan. 14.

Ireland Baldwin: “I am not my parents” >>

Although Baldwin is young, many believed she was very serious about her surfer beau, and at one point, the pair even sparked engagement rumors when she was spotted wearing a ring.

According to People, the model previously confessed how close she felt to her man, saying, “I would say he is my best friend. We have our moments but that’s rare. We can act stupid in public, private or wherever and we are always laughing.”

However, it appears that’s all over now. And the reason for the split apparently came from Baldwin.

A source revealed to Us Weekly, “Her life has gotten crazy in the past year or so.”

“She is really trying to keep her momentum going as a model and she can’t do that and go to school and have a boyfriend. She’s young, she always had an idea that it wouldn’t last forever.”

And the daughter of Alec Baldwin and Kim Basinger isn’t only making changes to her romantic life, she’s also made some rather dramatic changes to her physical appearance. The beautiful model has uploaded images to her Instagram account that show her sporting a new lilac hair color.

According to Us Weekly, Baldwin wrote of her hair, “I could get used to this.” She later added, “Purple hair and work out clothes really don’t go together. Like I may have to give up physical activity for my purple hair.”