Katherine finally gets what’s coming to her on The Vampire Diaries. I think we can all agree it’s long overdue, and we couldn’t imagine a more fitting end. 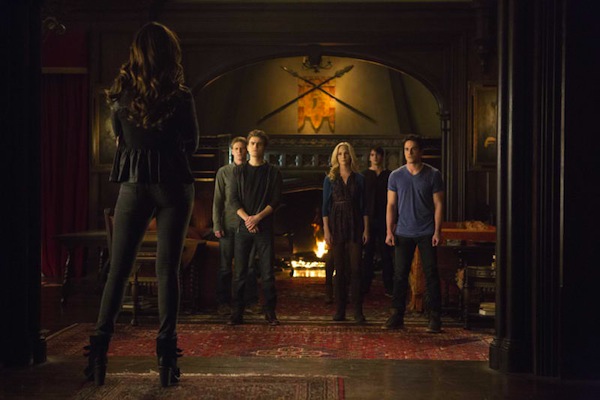 Boys and girls, the moment we’ve all been waiting for on The Vampire Diaries has finally arrived. Adieu, Katherine, adieu.

But we’ll get to Katherine (Nina Dobrev) in a second.

First, we have to say goodbye to someone we were actually sad to see leave the show. But we’re happy we’re sad, if that makes sense? Nadia dies tonight from the werewolf bite after Katherine fails to get a cure. It was the perfect ending to her character arch, and she didn’t overstay her welcome on the show. We also love that Katherine essentially sacrifices herself by returning to the Salvatore house to be at Nadia’s side as she passed on. It was a really beautiful moment on the show.

And then there’s Katherine, who, of course, doesn’t leave without a parting gift. After Nadia dies, Katherine makes some grand “apologies” to the gang. (We use the quotes because she really just gives herself credit for everything good in their lives — namely turning the majority of them into vampires.) In the end, Stefan (Paul Wesley) is the one to stab her. She romanticizes the moment with some words about their love story but, at the end of the day, we’re all just ready to see her disappear.

And disappear she does. Except to Bonnie. Katherine has another bout of taunts for her as well as she passes over, including a juicy little tidbit of information that she injected Elena’s (Nina Dobrev) body with Dr. Wes’ vampire craving concoction.

Just when we’re so furious we wish we could see Katherine killed again, something even better happens. A wind sweeps through the church, and Katherine is pulled away by a dark force Bonnie has never seen before.

Can you say mystical hell? Just when Katherine thinks she’s one upped the gang for good, she’s the one who gets a nasty surprise. Have fun with that eternity of darkness! We can’t even be upset because, well, she definitely brought it on herself.

Meanwhile, Damon (Ian Somerhalder) has a feisty heart to heart with Tyler before biting him and escaping his cell. Damon says he realizes things with Elena are probably over despite the fact that the truth about Katherine has been revealed. He asks Tyler about New Orleans this time of year as an option for his getaway. Is Damon heading to The Originals?! Now that would be interesting.

Then, Damon ends his revengenda with a final kill. He finds Dr. Wes and does a little experimenting of his own by first punching a hole in the good doctor’s gut, followed by a little eye removal surgery. While Wes is awake. And you’d better believe without any pain medication. Though, in the world of The Vampire Diaries, hard confirmation is always needed when a character dies — we’re gonna go ahead and say the doctor is out.

But, alas, it looks like Damon has decided to stick around Mystic Falls for a while longer. With Elena on the up and up, Damon realizes that whether or not she’ll have him back, he’s going to tell her the truth. He doesn’t want to end up like Katherine, running for his life and alone.

Elena’s eyes flutter open, and she says a sweet hello to Damon. Too bad he doesn’t realize that in a quick minute, she’ll be going for his jugular.