Jared Leto is not among the throngs of fans falling in love with Jennifer Lawrence every time she takes a red-carpet tumble. In fact, he finds her antics a tad suspicious. 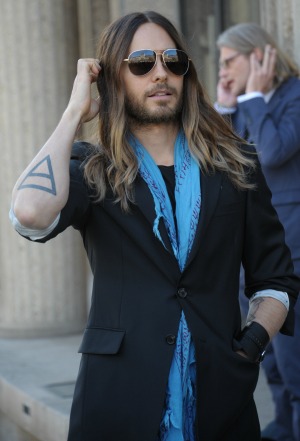 Jared Leto isn’t so sure Jennifer Lawrence’s clumsiness is as innocent as it looks at first glance. Could it be the actress, who fell at the Oscars two years in a row, is putting on a ruse?

During a chat with Access Hollywood, the long-haired hunk who stole hearts by paying tribute to his mom from the podium admitted, “You know, I’m starting to wonder if this is a bit of an act.”

You’ll recall Lawrence had a peculiar on-stage appearance at the 2014 show, muttering to fellow stars in the front row, “Why are you laughing? What, is this funny? I’m still watching you!”

Leto went on to share some insight into what had the American Hustle star straying from the teleprompter, admitting his family and the ceremony’s host were up to no good.

“She said, ‘What are you laughing at?’ But what she didn’t know was that Ellen [DeGeneres] was on the side… making, pantomiming [motions like], ‘Don’t fall, don’t fall!,’ and my mom and brother are all cracking up,” he explained.

Leto added with a laugh, “I guess we don’t have manners. You can take them out of Louisiana, but you can’t take the Louisiana out of them, right?”

Regardless of the controversy, both megastars are continuing on with the fabulous life. Leto is pictured here on March 5 while in France for Paris Fashion Week, while Lawrence is dreaming up a getaway far from prying paparazzi lenses.

“I’ve never been to Greece, that’s why I want to go,” she confided to E! News. Here’s hoping the accident-prone Dior darling has medical insurance that covers mishaps abroad!

Is Jared Leto onto something about Jennifer Lawrence or just stirring up trouble?