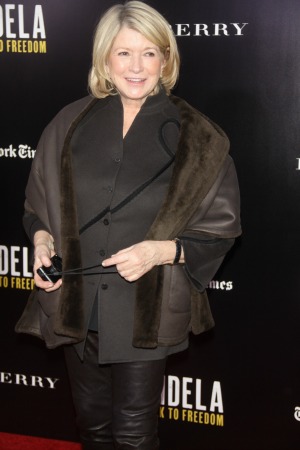 Don’t ever call Martha Stewart conservative and boring. In fact, the lifestyle guru proved herself to be downright saucy during her Reddit AMA on Thursday.

The 72-year-old had the best comeback, though, with “Barbara and I have better things to talk about.”

She also didn’t shy away from offering up her best sex tip when asked by a Reddit User.

Stewart responded, “Always take a bath before and after.”

Another user piped in with, “Do it DURING a bath. Kills two birds with one stone.”

She sassily replied, “That’s good too, and don’t forget to brush your teeth.”

She did offer up more gentle answers about binge viewing House of Cards and enjoying Indian food, but it’s her punch of personality that kept the fans interested. Even her choice of movies was a bit of a surprise.

If you are thinking that Stewart’s favorite movie of the year would be something mainstream like Gravity, think again. The TV personality informed her fans that “it was The Wolf of Wall Street.” It seems she prefers a bit more grit to her cinematic fare.

Watch out, she’s a little spicy in and out of the kitchen!