Miley Cyrus says Katy Perry’s own tongue has made some questionable acquaintances. 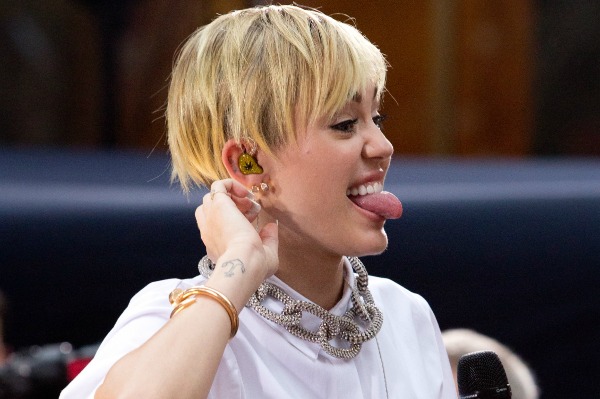 For once Katy Perry kissed a girl and did not like it — but now that girl is snarking back.

Miley Cyrus tried to slip Perry the tongue at a recent concert on her Bangerz tour where the “Dark Horse” singer was in the audience, but Perry wasn’t having it.

“I was like, ‘That tongue is infamous,'” she said on the Australian Jules, Merrick & Sophie with Mel B radio show, explaining why she turned away. “I don’t know where it’s been.”

Perry didn’t seem to mind too much, though, tweeting afterward that she “adores” the “Wrecking Ball” singer.

But sassy Cyrus slammed back at Perry with a dig of her own, hitting her where it hurts: In the love life. Just days after news broke that Perry and lothario boy-toy John Mayer had called it quits, Cyrus got the last word on Twitter.

It is unclear if Cyrus was referring to Mayer or Perry’s ex-husband, Russell Brand, who himself is no angel, but Mayer has a reputation for a dodgier love life and since he is the more recent ex, is the more likely of the two.

Is Miley Cyrus using a teleprompter on tour?
Miley Cyrus wants to school kids on the art of the risqué
Are Miley Cyrus and Jared Leto hooking up?