Oscar Pistorius was left crying and covering his ears as a witness described the horrific scene where Reeva Steenkamp died. 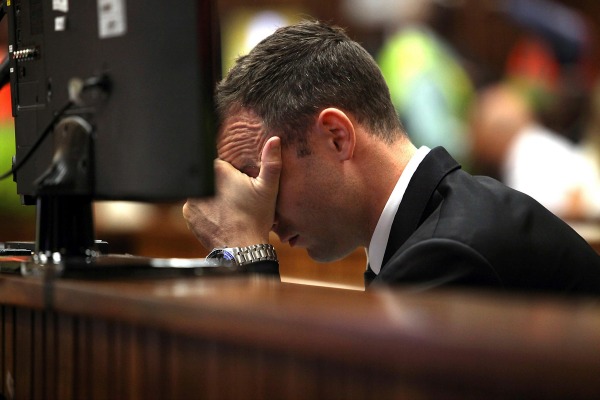 A witness in the Oscar Pistorius murder trial testified about the grisly scene he found upon answering the athlete’s cries for help.

Dr. Johan Stipp, who lived in the same gated estate complex as the athlete, was the first on the scene after he heard Pistorius screaming for help, and he described what he found when he arrived, saying, “At the bottom of the stairs … there was a lady lying on her back on the floor.”

Pistorius said in his court statement that after he realized he shot Steenkamp and not a burglar, he carried her from the bathroom down the stairs to get help.

“I remember the first thing he said when I got there was, ‘I shot her, I thought she was a burglar and I shot her,'” Stipp told the court.

The doctor described Steenkamp’s injuries, including exposed brain tissue and severe lacerations from gunshots on her right leg and arm, and said Pistorius was trying to clear her airway to get her to breathe when he came upon them.

“She had no pulse in the neck, she had no peripheral pulse,” Stipp said of his efforts to try to revive the model. “She had no breathing movements that she made.

“Oscar was crying, saying, ‘Please let her live,'” he recalled. “He was saying he would dedicate his life to God if she will only live.”

Pistorius was seen in court doubled over with his hands over his ears, at one point appearing to convulse, during the doctor’s testimony.

The doctor later disputed earlier testimony from a witness who said she heard Steenkamp screaming after the gunshots, asserting that her injuries would have been immediately fatal, or at least caused enough brain damage that she would not have been able to scream.

And while Stipp doesn’t know what transpired before he arrived on the scene, he said that Pistorius’ shock and horror seemed sincere.

“He definitely wanted her to live, yes,” Stipp said. “He looked sincere to me. He was crying; there were tears on his face.”

Earlier, the defense lambasted two other witnesses, a husband and wife whose stories changed on the stand from their police reports, and accused them of collaborating to make their testimony more believable and damaging to the defendant.

“You and your wife could just as well have stood together in the witness box,” attorney Barry Roux told Charl Johnson.

The Pistorius trial is expected to take three weeks.