The Kardashian sisters are not having much luck at the moment! Reports have surfaced that both Kourtney and Khloé have been victims of crime, and mom-of-two Kourtney is feeling very violated! 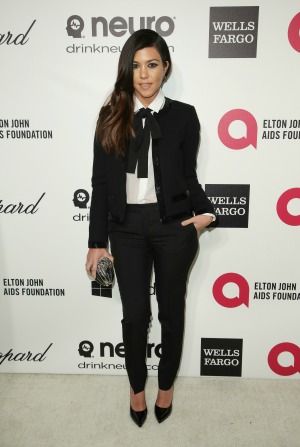 The Kardashian clan is seriously having some bad luck!

First, Khloé and her soon-to-be ex-husband Lamar Odom’s former love nest in the Tarzana neighborhood of Los Angeles, California, was discovered robbed on Monday and the thieves managed to get away with $250,000 worth of valuables, and now Kourtney is having the same bad luck as her sister!

According to reports, the reality TV star had $50,000 in cash taken from her Calabasas home in Los Angeles last month. Let’s hope the sisters recognize the pattern and the fact that they need to tighten up on security! Regardless, it is never a nice situation to be in, and Kourtney is said to be feeling very upset about the entire situation.

A source at Us Weekly said, “It’s so sad. She feels so violated and is freaked out.”

To make matters worse for the mom of two — who has a son Mason, 4, and daughter Penelope, 19 months — she believes the crime was an inside job. According to TMZ, police believe that both her burglary and the robbery that occurred at her younger sister Khloé’s home are connected because the pair work with so many of the same people.

Khloé is said to be out for vengeance and has reportedly ordered lie detector tests for all those who had access to her home because there were no signs of a break-in!

However, recent reports have said that Odom’s drug dealers could be to blame for the missing goods at his former home because he apparently still has not settled his debts with two major suppliers.

So why did Kourtney have so much cash on her in the first place? Apparently, she made an appearance and was paid in cash, a whopping $50,000! The money was allegedly left in a safe place in her home for several days, but when the Kourtney and Kim Take New York star finally decided it was time to take it to the bank, she discovered it was missing.

Could the Kardashian sisters just be involved in a string of bad luck? Or is someone out to get revenge?

Tell us what you think in the comments below.