Angelina Jolie is about to give kids all over the world nightmares with her portrayal of the scary villain in Maleficent. And she did such a good job at being terrifying that she even made her own son cry! 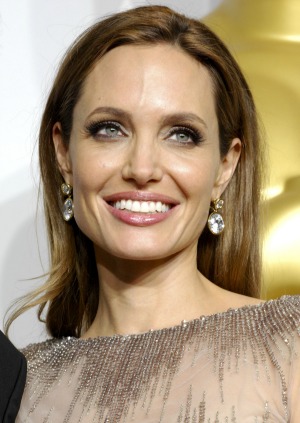 Angelina Jolie is one of Hollywood’s hottest stars, and so her transformation in the Disney thriller Maleficent has been rather creepy. So creepy, in fact, that she even scared her own children, and other children would not even come near her during filming!

According to Us Weekly, in the March issue of Entertainment Weekly, the star revealed why her daughter Vivienne, 5, was cast as Princess Aurora in the upcoming thriller Maleficent.

“We think it’s fun for our kids to have cameos and join us on set, but not to be actors. That’s not our goal for Brad [Pitt] and I at all. But the other 3-and 4-year-old [performers] wouldn’t come near me. It had to be a child that liked me and wasn’t afraid of my horns and my eyes and my claws. So it had to be Viv.”

However, whilst the mom of six’s daughter may not have been afraid of her, one of her other children certainly was! Jolie revealed that her second oldest child, Pax, 10, was very upset when he first saw her in her scary fantasy costume.

Jolie revealed, “When Pax saw me for the first time, he ran away and got upset — and I thought he was kidding, so I was pretending to chase him until I actually found him crying. I had to take off pieces [of the makeup] in front of him to show him it was all fake and not freak out so much.”

Many fans thought Jolie would be spectacular as the horned villain, and she confessed with a laugh, “It is really funny when people say you’d be obvious for a great villain.”

However, when it comes to children, no one really likes the villain in Disney movies, and the Salt actress’ own kids really felt no different. When her brood of six — Maddox, 12, Pax, 10, Zahara, 9, Shiloh, 7, Vivienne and Knox, 5, whom she shares with her beau Brad Pitt — tried to persuade her not to take the role, it took some serious parenting to try and make them change their minds.

“I said, ‘Let me tell you the real story but you can’t tell anybody. So this was my test too, like any parent. The next day, I heard Shiloh getting into a fight with another kid, defending Maleficent, saying, ‘You don’t understand her!’ They got into a bit of an argument and I thought, that’s the reason to do the film.”

At least Jolie’s children listen to her, but let’s hope she has not destroyed herself for children across the globe when they associate her with the evil Disney villain!