Simon Cowell has taken to being a daddy so well he is bursting to tell the world he can’t wait to have more babies. 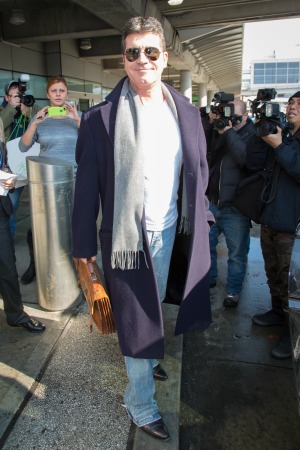 Who would have ever thought it? The notoriously harsh X Factor judge has taken to fatherhood very quickly. In his first interview since his Valentine’s Day baby was born, Simon Cowell opened up to Extra about his feelings about being a papa.

“I was born to be a dad,” Cowell told Extra, via E! News. “I wouldn’t rule out (more children). Well, I got Squiddly and Diddly, and I couldn’t imagine just Squiddly or just Diddly… I had a brother when I was younger, so I kind of think it’s cool to have two or three…”

Cowell, who spends a lot of time in London for Britain’s Got Talent, also spoke about his dramatic arrival to his son’s birth. He says he barely made it before Eric, whom he co-parents with girlfriend Lauren Silverman, arrived. “Phone rings at half past five in the morning, ‘I’m about to give birth (said Lauren),’ so we had to find a flight, which we did, and I got there with two hours to spare,” admits Cowell.

We already knew Cowell was a proud father based on the touching photos he released just two days after Eric’s birth. Cowell also revealed his soft side when he divulged that his new addition was in fact named after his own father. “I hope that I can have the same relationship I had with my dad,” the tough-as-nails talent judge said previously. “He wasn’t someone who was a great disciplinarian. We had a fun relationship. He gave me really constructive advice in my life, which I still carry today and pass on to other people. So if I can have the same relationship with my son as I had with my dad, then I think he’ll be very happy and I’ll be very happy.”

Cowell also said little Eric has a fan in London who can’t wait to meet him: Cowell’s mother. “I think she told the whole village, she’s really excited,” said Cowell.

So what’s the hold-up, Simon? The world can’t wait to see more of your softer side!