With their significant others in tow, Cate Blanchett and Amy Adams spent the day after the Oscars at a West Hollywood tattoo parlor. There was evidence of fresh ink but, so far, no confirmation on what the new artwork is! 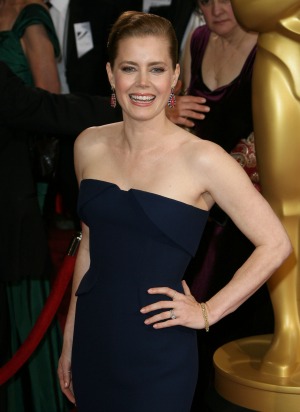 Cate Blanchett and Amy Adams didn’t waste any time running to a West Hollywood tattoo parlor the Monday morning after the Academy Awards. There’s so much to speculate about in terms of what the two amazing actresses could have chosen to ink themselves with while still high on their Oscar buzz. The two actresses seem too original to go with the obvious tattoo of the gold statue in all its glory. And since they arrived together, it’s fun to think they got some matching work done. So the question is: What the heck did they get forever imprinted on their bodies?

Walt Disney was a bigot? Meryl Streep’s claims get a boost >>

The curiosity is killing everyone, so here are five very hypothetical situations to ponder until the mystery is solved:

The first situation we pose is that both Adams and Blanchett had #suckitjulia tattooed on their rib cages. This one has double Oscar meaning. The obvious: Blanchett’s inside joke with Julia Roberts during her acceptance speech at last Sunday’s ceremony. What was that all about? And, for Adams, the #suckitjulia is a nod to the movie, Julie and Julia, in which she starred with Meryl Streep in 2009. Streep was nominated for an Academy Award for her performance in that film, while Adams was not.

In the second circumstance, both of the actresses had the traditional comedy and tragedy theater masks inked on their lower back. Both the American Hustle and Blue Jasmine stars have an intense background in theater. It would only make sense to commemorate all the grueling theater work they’ve done.

On the same note as theater, both actresses are graceful dancers. According to IMDb, Amy Adams was an apprentice at a local dance company while in high school and she had ambitions of being a professional ballerina. While Blanchett’s training isn’t as extensive as Adams’, she did take lessons in her youth and performed most of the difficult dancing scenes in The Curious Case of Benjamin Button. So, in our third hypothetical situation, the thesps decided on a pair of dainty pink ballet slippers on their shoulder. They are now bonding over cardio barre and their fresh tats.

In the fourth situation, Adams and Blanchett went in a more fun, less professional direction: The twosome got the word “Believe” tattooed on their inner arms. After being inspired by the public release of Justin Bieber’s jail tattoos, the two passionate Beliebers decided on the tattoo in homage to Bieber himself. The new BFFs then vowed to attend a concert together in the hope of meeting the singer in person.

In the fifth scenario, Adams and Blanchett decided on the initials “PSH” on their rib cages. Both actresses starred with Philip Seymour Hoffman at different times during his career (Adams in Doubt and Blanchett in The Talented Mr. Ripley). The two beauties have also spoken about Hoffman since his death. Adams appeared on Inside the Actors Studio and tearfully spoke of her love for Hoffman. Blanchett dedicated her Best Actress BAFTA Award to Hoffman back in February. The two felt that getting inked with their super-talented friend’s initials would be an appropriate way to pay homage together.

What’s your pick? Did the actresses go with silly, sentimental, or career-oriented ink?