Katy Perry seemed surprised (and slightly disgusted) when Miley Cyrus tried to give her an open-mouthed kiss, and now we know why. 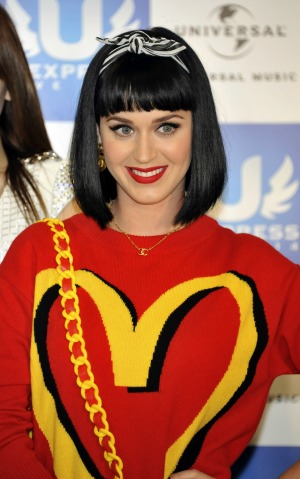 Miley Cyrus has had some big surprises on her new tour, including a kiss with fellow singer Katy Perry. In fact, the kiss was even a surprise to Perry.

The wild-child singer has been doing some crazy things while on the road to support Bangerz, and celebs have been in the audience at many of the shows. When Perry showed up in the front row, Cyrus got off the stage to plant a kiss on the singer. But Perry said she thought it would be a friendly kiss.

“I was just going in for a ‘hey, girlfriend’ kiss,” she told an Australian show Jules, Merrick & Sophie, adding that when it became more than just friendly she turned her head. “I saw that and that’s when I walked away. I was like, ‘That tongue is infamous — I don’t know where it’s been.'”

The photo of the kiss made it seem mutual, but a video showed Perry turning away as soon as Cyrus opens her mouth. The “Roar” singer wasn’t upset about the kiss though, and later tweeted a photo of the aftermath.

Perry will be going out on her own tour very soon, and was in Australia to announce the down under leg of the Prismatic tour. She is also growing up and moving on with her life. She and longtime boyfriend John Mayer recently broke up, just days before she helped deliver a baby.

“My sister gave birth in her living room and I got to be an assistant doula, which is a home birth. It’s kind of just there for support,” Perry said. “I was like Scorsese filming everything, getting in there. She doesn’t want to see that for about a year though. I was in it, I probably shouldn’t give too many details. My sister is actually the true rock star, she gave birth in her living room, without a single Advil.”

The Prismatic tour kicks off in May.