He’s a dad and a granddad! Kelsey Grammer is expecting baby No. 2 with wife No. 4. 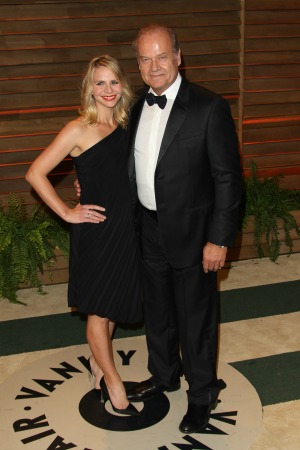 Kelsey Grammer is already a grandfather, but that certainly isn’t going to stop him from having more kids of his own. Us Weekly is reporting that the 59-year-old actor is having his second child with his fourth wife, Kayte.

The couple welcomed daughter, Faith, 19 months ago. They were originally expecting twins, but they lost their baby boy.

They told People in July 2012, “We were ecstatic earlier this year when we announced that Kayte was carrying twins. Tragically we lost the little boy shortly thereafter.”

The couple have been married since February 2011 after a messy affair and a very public divorce from his second wife, Camille Donatacci. The divorce was chronicled on Bravo TV’s reality show The Real Housewives of Beverly Hills.

The expectant parents attended the 2014 Vanity Fair Oscar party on Sunday. Kayte was wearing a one-shoulder black dress that hid any sign of a baby bump. Kelsey was sporting a traditional tuxedo at the event.

This will be the former Frasier star’s sixth child. He is father to Spencer, 30, Greer, 22, Mason, 12, Jude, 9, and Faith. His children are all from prior relationships or marriages. He is also granddad to Spencer’s 2-year-old son, Emmett.

It sounds like Grammer enjoys a big brood because he and his younger wife want a big family. In August 2012 he told Access Hollywood Live, “I think we’ll have at least two more, if not three or four. I think it’s a great way to live a life.”