Shakira is loving every minute of motherhood. In fact, she loves it so much that she wants to have another eight or nine children with her beau Gerard Piqué! 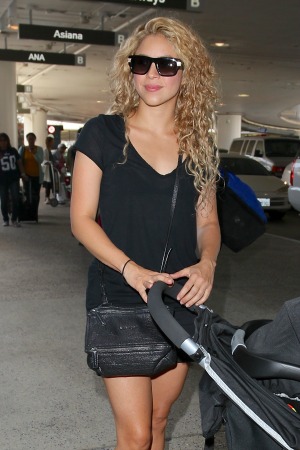 Shakira is one of the most beautiful songstresses the world has ever seen, and we can’t lie, she looked incredible while pregnant, but it is a little surprising to learn that she wants a lot more kids — eight or nine to be exact!

The Colombian-born star has really blossomed since giving birth to her 13-month-old son Milan, whom she shares with soccer player boyfriend Gerard Piqué, and she has gushed about motherhood on more than one occasion. Let’s hope that Piqué wants a brood as big as his “Hips Don’t Lie” hit maker does — otherwise, he is in for quite a surprise.

According to Us Weekly, Shakira revealed her dreams about having a big family in the April 2014 issue of Latina, saying, “If it weren’t because of my music projects, I would be pregnant already.”

“I would love to have eight or nine kids with Gerard — my own fútbol team.”

Although, the singer will have to start adding to her brood pretty soon if she wants to have so many children before her biological clock starts ticking. However, although Shakira’s career is flourishing — she is about to release her 10th studio album on March 25 and is a judge on The Voice — her son is her No. 1 priority.

“I used to go in circles around an idea, but since he arrived I don’t have much time — I have to rush back home — so he has helped me learn how to focus.”

The “Can’t Remember to Forget You” hit maker went on to praise her fans’ attitude about her having children. She said, “When you have a baby, when you feel his love, you feel so at peace with the world. You just want to share the good news and share how happy you feel. I have so many people out there that celebrate with me when they know that I’m happy. “

“And they hate it when they know that I’m suffering because someone has hurt me. In a way I feel supported and, in a very strange way, accompanied through life. They express so much love for Milan, so much affection. I can only hope that as he grows up he learns how to give that love back to all of those people that give him so much every day.”

And things appear to be going very well in Shakira’s personal life, too. She is loving every minute of her time with Milan, and she is filled with love and praise for her FC Barcelona beau.