Matthew McConaughey took home the Oscar gold for Best Actor, but instead of wanting to celebrate at a lavish after party, the actor couldn’t wait to get home with his wife Camila — so they could make another baby. 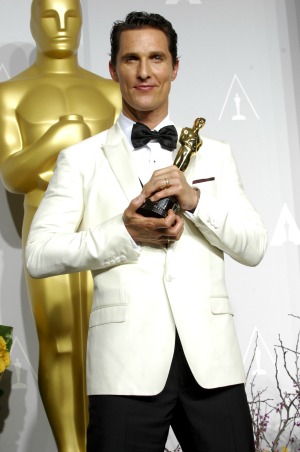 Matthew McConaughey deserved every bit of award nomination gold for his role as Ron Woodroof in the critically acclaimed film Dallas Buyers Club, and it appears that taking home the Oscar for the Best Actor in a Leading Role on Sunday night was the one that left him the most emotional — and broody!

The star apparently was in a rush to leave the 86th Academy Awards and get home to spend an intimate moment with his beautiful wife Camila Alves. And McConaughey was apparently overheard telling her he wanted to make another baby.

Many other Oscar winners wanted to enjoy a long night of celebration and partying, but apparently, McConaughey had something else on his mind. According to Entertainment Wise, a source told The Sun that the actor was overheard saying, “We won’t stay at the after party long — I want to go home and make another baby!”

The source added, “Matthew wasn’t worried about getting drunk, he was more keen to get home with his beautiful wife, which he made quite clear in her ear.”

The The Lincoln Lawyer actor and his model wife were spotted kissing throughout the night, and it looked as though they were very in love.

The beautiful couple already share three children together, Levi, 5, Vida, 4, and Livingston, 14 months, and if another tiny tot pops up in the next nine months, then we will know for certain how McConaughey intended to celebrate his Oscar win.

And it would not be all that surprising because family is very important to McConaughey, and he paid tribute to them during his Oscar acceptance speech, saying, “To my wife, Camila, and my kids, the courage and significance you give me every day I go out the door is unparalleled. You are the four people in my life that I want to make the most proud of me. Thank you.”