Just when you thought awards season was over, Conan O’Brien is announced as the host of this year’s MTV Movie Awards show, and it’s going to be epic! 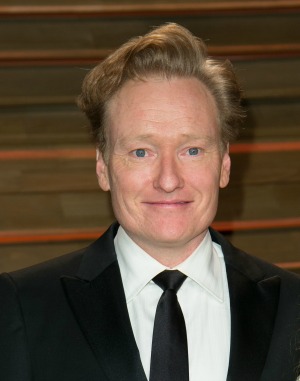 The awards season is not over just yet because we still have the 2014 MTV Movie Awards to look forward to on Sunday, April 13. And there is even more reason to get excited now because late-night extraordinaire Conan O’Brien will be hosting the event!

The MTV Movie Awards show, which will be held at the Nokia Theatre L.A. Live, is set to be an interesting affair filled with golden popcorn and a celebration of the very best movie performances and films of the past year. In fact, this year’s awards show should prove to be even more eventful now that O’Brien is taking center stage.

According to MTV, the Emmy-winning comedian revealed his thoughts on landing the hosting gig, saying, “After eight years of intense (negotiations), I am honored to announce I am hosting MTV’s second most prestigious awards show.”

There’s no doubt the star will do a great job because he has already hosted the Emmy Awards in 2002 and 2006. However, O’Brien has some pretty big shoes to fill when it comes to the MTV Movie Awards. Last year’s hostess, Australian funny woman Rebel Wilson, made the night a memorable occasion.

The Bridesmaids actress reunited the cast of the hit movie Pitch Perfect to perform some brilliant a cappella versions of hit tracks such as Eminem’s “Lose Yourself,” Miley Cyrus’ “The Climb” and Alicia Keys’ “Girl on Fire.”

With some exciting nomination categories, including Best Kiss, Best Villain and Best Breakthrough Performance, as well as exclusive summer previews lined up, the 2014 MTV Movie Awards ceremony is surely going to be one of the most eagerly anticipated awards shows of the year.