There’s enough suspicion to go around on Pretty Little Liars, and this episode it’s Mrs. DiLaurentis’ turn to have the A finger pointed her way. 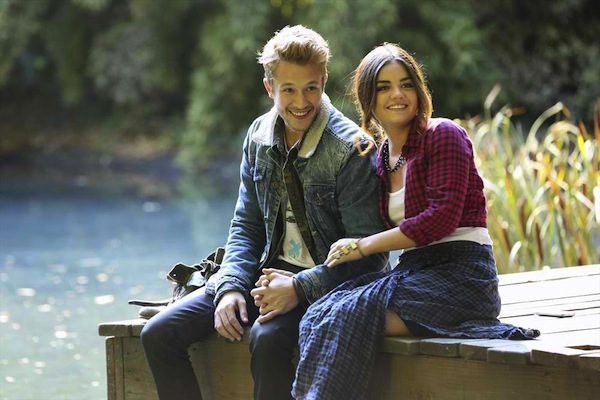 A couple of episodes ago it was Ezra who looked guilty. Then we moved on to Spencer (Troian Bellisario) and ended the episode with some suspicious behavior from Paige. Now, Mrs. DiLaurentis’ time has come for some A-like behavior.

The girls seem to be on track to end this season at a happier place. At least, we’re keeping our fingers crossed that’s how things will pan out. Season 4 has been quite the downer!

Going hand in hand with the girls’ adventures to bigger and brighter things are new relationships. You know what that means — bring on the boys!

Enter bachelor No. 1. Aria (Lucy Hale) is attempting to move on from the Ezra fiasco by taking some time away in Syracuse. What is supposed to be some time with Dad ends up being some time with Riley, a bad boy musician with a heart. The two definitely have a few romps in the sack along with some good in-depth conversations.

In the end, of course, Aria must return to Rosewood while Riley is off to make his dreams come true by pursuing a music degree at Berkeley. Parting is such sweet sorrow, but she asks him to be in touch if he ever finds himself in Rosewood. Wait, Ezra who? The segue relationship is just what we need to get away from crazy, depressed Aria.

Bachelor No. 2 is all for Spencer. After a brief stint in a rehab facility to flush the drugs, she returns to find a handsome man sitting at her counter, and a mother telling her she must skip school for the time being and spend all her time with said attractive boy named Dean. He is her live-in rehab counselor, and Spencer is not happy. For the life of us, we can’t understand why.

Yeah, yeah, we’re team Toby and all, but he’s not really on the Spencer train right now. Dean, on the other hand, is all for productive and healthy recovery. He gets Spencer and, though the two don’t know it yet, we definitely see some sparks starting to fly.

Bachelor No. 3 isn’t really new. Hanna’s (Ashley Benson) been flirty with Travis since Caleb left, but this episode marks their first official date. Putting it nicely, Hanna botches the entire evening. Sure, she’s got some A problems to deal with. The police question Hanna about the note they found claiming Alison is alive, and it puts Hanna in a tizzy. We get it, but she spends more time looking at her phone than at Travis. Finally, she ditches out in the middle of dessert to go be with the girls. If we were Travis, we would have made her pay for her half of the meal. A quick peck on the lips before she abandons him cannot make up for that mess of an evening.

In the end, Aria reveals to the gang that Ezra believes Mrs. DiLaurentis is A. Taking it up a notch, Spencer is having weird visions about hitting Ali with a shovel, and she doesn’t know if they are hallucinations or memories. To top off the suspicion, Hanna recognizes some stationery in Emily’s (Shay Mitchell) room. It matches the note the police showed Hanna from the person who claimed to know Ali is alive. Hanna puts two and two together and realizes Paige gave the note to the police.

Between Mrs. DiLaurentis, Spencer and Paige, who do you think is guilty?