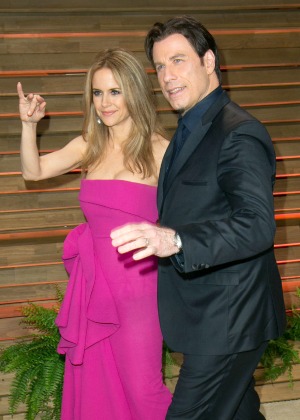 John Travolta is all too aware his mistakenly introducing Idina Menzel as Adele Dazeem was a major cringe-worthy blunder.

In a statement released Tuesday, after throngs of Academy Awards’ enthusiasts have discovered their own Travoltified name, the actor did his best to join in on the fun.

“I’ve been beating myself up all day,” Travolta stated in a message distributed by his publicist.

Cracking a joke by referencing the hit the Frozen songstress performed on stage Sunday night, he added, “Then I thought… what would Idina Menzel say. She’d say, ‘Let it go, let it go!'”

“Idina is incredibly talented, and I am so happy Frozen took home two Oscars Sunday night!”

Thus far, Menzel has yet to reference the infamous Travolta introduction directly, though shortly after the Oscars concluded, she tweeted, “That was crazy balls! What a night.”

Kristen Bell, who lent her voice to Frozen, hasn’t been as shy about poking fun at the mishap, however. The mother of Lincoln Shepard tweeted after the film’s victory, “So proud of my friends @alittlejelee @lopezbobby @Lyrikris10 Chris buck, Peter Del Vecho& @idinamenzel (Adele Nazeem) for their wins tonight.”

No one’s denying the Travolta-Menzel mishap is funny stuff, but it does seem like the actor genuinely feels bad for his gaffe, right?

Is it time to give John Travolta a break on his epic Oscars name flub?